The King Of Kells best in Curragh finale 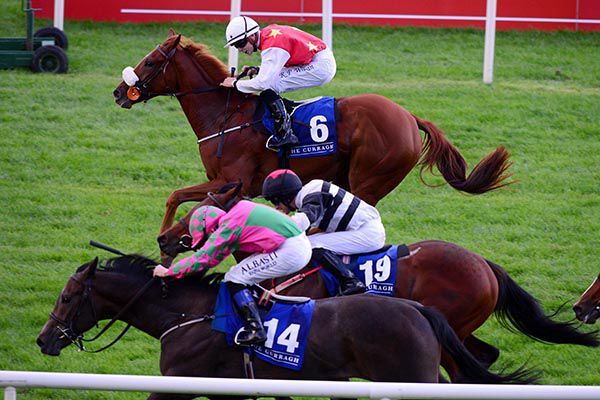 The King Of Kells made up for a narrow Naas defeat last time to land the concluding Curragh Autumn Festival Nursery Handicap under Chris Hayes.

With the rail to help, Mick Mulvany’s runner finished well to catch Myrcella

The runner-up raced out in the centre and after looking a winner in the final quarter mile she was caught near the line and beaten by a neck.

It was a short head and a length and a quarter to outsiders, Megans Beau and Dragon Of Malta in third and fourth places.

“We were a bit afraid of the ground today and, drawn 20, I said to Chris to keep it straight," said Mulvany.

“Chris said he was in great form going to the start and he had a job getting him down.

“We might look at something like the Birdcatcher if the handicapper is not too hard on him.”

A.J. Slattery, rider of Graduate Goddess trained by Gavin Cromwell, reported to the Clerk of Scales that his mount was very slowly away from the starting stalls.

R.P. Whelan, rider of Myrcella trained by P.F.McEnery, reported to the Clerk of Scales that his mount hung left in the straight.

The Irish Horseracing Regulatory Board Veterinary Officer examined Yolo Aris (GB), trained by J.P. Murtagh, at the request of the Stewards and reported the animal to be blowing hard post race.