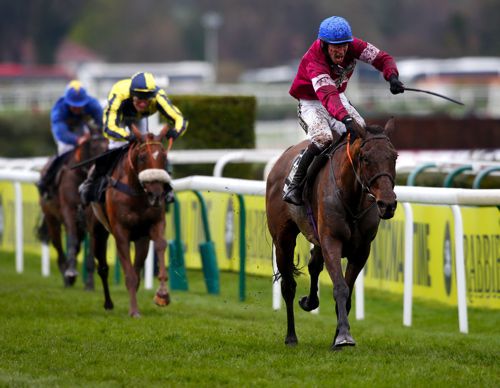 Tributes have been paid to The Last Samuri after a decision was made to retire the 2016 Grand National runner-up.

Time was called on the career of the 11-year-old, who had an entry in the Glenfarclas Cross Country Chase at next week’s Cheltenham Festival, after he failed to complete in a veterans’ chase at Newbury on Saturday.

Initially starting out with Donald McCain, the Paul and Clare Rooney-owned gelding — who won eight out of his 27 races — switched to Kim Bailey in 2015 before joining Harry Fry in November.

Jason Maguire, racing manager to the owners, said: “Paul and Clare Rooney are delighted to retire The Last Samuri as a sound horse.

“He has given them some great days. Obviously, his second in the 2016 Grand National was a brilliant run — and that day he gave it his all.

“It was going to be his last year. But he went to Harry (Fry) to see if a change of scenery could rekindle the old spark, and it looked for a moment as though it did at Taunton.

“They are very fair people and they didn’t see no point in slogging the horse around for no reason — so they took the easy decision to retire him after Newbury.”

Maguire confirmed that The Last Samuri, whom he rode himself on seven occasions before calling time on his career in the saddle, will spend his retirement with a familiar face.

He added: “Kim Bailey’s daughter is going to look after him in retirement, because she knows the horse well.

“I am sure he will do some Retraining Of Racehorses events, and it will be great to see the horse kept busy and not just stuck in a field.

“Hopefully he will have a great retirement.”

Gold Cup-winning trainer Bailey echoed the sentiments of Maguire, describing the diminutive gelding as a “complete trojan” and a “little gem” of a horse.

Bailey said: “He was a horse I was really fond of.

“He was a complete trojan. He was small , compact and an unbelievable athlete. He was a super jumper, gutsy and just a little gem really.

“At home he would always go out in front of the string, and he never worked with any other horse — but that was him.

“The only other horse that I have had like him was Docklands Express. He was very similar in build and had the same agility. Both horses could turn themselves to anything, because they were so gifted.”

Although The Last Samuri failed to better his 2016 Grand National effort, finishing 16th a year later and pulling up in the race 12 months ago, Bailey has fond memories of his near miss on Merseyside.

He said “It was a remarkable performance on ground that most probably didn’t suit him, because it had been raining and it was bottomless. He ran his heart out.

“It looked like he was going to win coming to the second last, but that was the longest run-in off my life. I went through all the emotions from thinking we were going to win to losing in such a short space of time.

“It was a great moment, and I was immensely proud of the horse. He was not quite a Gold Cup horse — but he was a seriously good handicapper.”