The two-year-olds take over at Naas 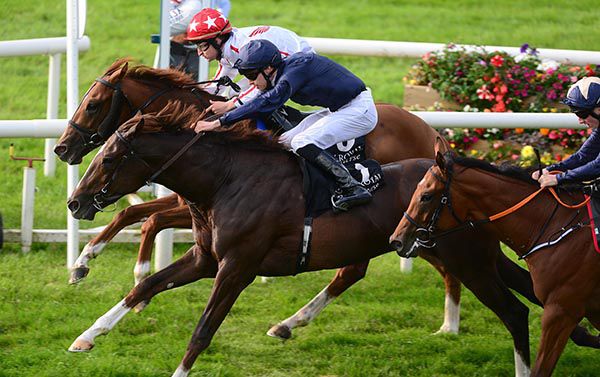 Recall The Show (far-side) just lost out at Down Royal. He bids to go a place better in the 3.50 at Naas
© Photo Healy Racing

It is juvenile day at Naas on Wednesday as the card is made up of eight races for two-year-olds.

Aidan O’Brien is not surprisingly well represented on the day with 11 runners and introduces some beautifully bred newcomers in the maidens.

One Ballydoyle runner with form, however, that looks a big player is War Leader in the Irish Stallions Farms EBF (C&G) Maiden.

The son of War Front was just denied in a tight finish over the same six furlong trip at Listowel nine days ago.

Faster ground now should surely suit the American-bred colt better and he looks the one the others have to beat.

Jessica Harrington saddles an obvious danger in Recall The Show who has been placed on his last two outings.

The Showcasing colt was narrowly denied by Royal County Down at Down Royal on his penultimate run before a solid effort when third in a decent heat at the Curragh.

He takes a drop back in trip now with his first three runs having been over seven furlongs.

O’Brien introduced a nice sort in Old Glory on the same card last year and looks to have some fascinating newcomers this time. Battle Of Liege makes his racecourse bow in the Irish Stallion Farms EBF Maiden over seven furlongs.

The War Front colt is a full-brother to Breeders Cup Juvenile winner Hit It A Bomb and Cheveley Park winner Brave Anna.

In the following five-furlong maiden No Nay Never filly Eden Quay is sure to attract plenty of attention.

She is a full-sister to the yard’s star sprinter Ten Sovereigns and holds an entry for the Cheveley Park Stakes later in the month.

Opening the action is the Welcome Naas Mens Shed Claiming Race and Denis Hogan will be hoping to strike with Be Like The Bird having acquired her in a claiming maiden at Tipperary.

The Dandy Man filly drops back in trip now but had run well over a similar distance when fourth at Sligo.

Connections try her in cheek-pieces now and she bids to confirm form with Vormir who was behind her in fifth last time.