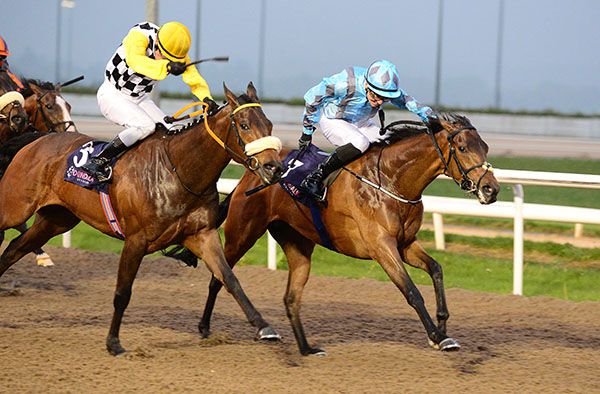 Syrena finally made the breakthrough on her thirteenth start, as she just held on to claim the Crowne Plaza Race & Stay Fillies Maiden.

Sent off a 5/2 chance this evening, the bay three-year-old was settled behind the leaders on the inner by champion apprentice Shane Crosse, and improved to lead from the two furlong pole.

She was ridden and kept on well inside the final furlong, just doing enough to hold off the late surge of Arabeska by a short head.

The runner-up was returned a 9/4 joint-favourite under Billy Lee for Willie McCreery, while A Step Too Far (6/1) was a further two and three parts of a length back in third. Carefully was the other joint-favourite and she finished fourth.

"It's nice to get her to win. She was good and consistent last year and things didn't fall right for her a few times this year,” said O'Brien who trains the winner for the Annus Mirabilis Syndicate.

"Shane gave her a nice ride. He waited, she has one run. Probably seven is her trip, I've been running her at a mile but we'll probably go six or seven from now on.

"I'd say she'll go for a handicap now, she ran okay in a few handicaps this year and I'd imagine her mark is going to stay around what it is."

The Stewards interviewed W.J. Lee, rider of Arabeska, concerning his use of the whip in the latter stages of this race. Evidence was heard from the rider concerned. Having viewed a recording of the race and considered the evidence the Stewards found the rider in breach of Reg.10.3.(g)(frequency) and having taken his record into account cautioned him.

M.A. Gallagher, rider of Pretty Smart trained by Patrick Martin, reported to the Clerk of Scales that his mount ran a bit erratic down the back straight.