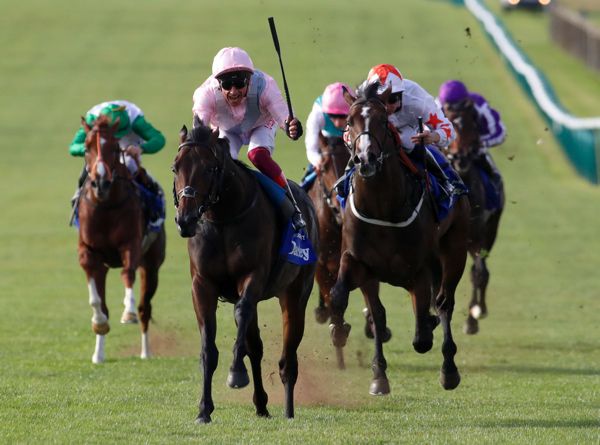 Too Darn Hot has been crowned the leading juvenile of 2018 following the publication of the European Two-Year-Old Classifications.

John Gosden’s charge has been given a rating of 126, ranking him as the best two-year-old in Europe since Frankel shared top honours with Dream Ahead on the same mark in 2010. There has been no juvenile rated higher since Xaar in 1997.

Too Darn Hot finished the campaign unbeaten in four starts — culminating in Dewhurst Stakes success at Newmarket last October — and he leads what was a strong division in 2018, with no fewer than six horses rated at 118 or above.

The British Horseracing Authority’s lead two-year-old handicapper Graeme Smith said: “Too Darn Hot confirmed himself an outstanding juvenile in the Dewhurst, where he put some strong form lines firmly in the shade.

“The last three two-year-olds rated at his level went on to win 15 Group Ones between them — and in what promises to be an above-average Classic crop, he already sets a lofty standard with the potential of better still.”

Smith added: “Too Darn Hot is a fascinating horse to watch. No two-year-old has been rated 126 since Frankel and Dream Ahead shared top honours in 2010. We are talking about a special juvenile here.

“I would like to point out, as the inevitable Frankel comparisons come, that Frankel did improve another stone as three-year and four-year-old. He is not at Frankel superstar levels yet, but he is very good.”

Smith believes Too Darn Hot has every chance of winning this year’s 2000 Guineas, but is less enthusiastic about his Derby claims.

He added: “He sets a good standard for the Guineas — 126 would win most Guineas. Obviously you have the weight-for-age factor as he has got to mature to the same level the average horse would through the winter.

“If he doesn’t, he still sets a good standard.

“He is not for me for the Derby. He could turn out to be a middle distance horse as it is certainly in his pedigree.

“He is an exuberant sort and he doesn’t settle 100 per cent — and if he is going to get beyond a mile, he will have to learn to settle. He has got fantastic speed at the end of his races, and that doesn’t lend its hand to staying races either.”

Gosden has another juvenile in the top 10 in the shape of Coventry Stakes winner Calyx, who is rated 115 despite having his season limited to just two races within 11 days in June.

Quorto was also unbeaten in three starts for Charlie Appleby, with his crowning glory coming in the National Stakes at the Curragh in September.

He is rated 121, just 1lb ahead of the Aidan O’Brien-trained Ten Sovereigns — who was the leading Irish juvenile colt in 2018.

The Irish Horseracing Regulatory Board’s two-year-old handicapper Mark Bird said: “Quorto put up the best performance by a juvenile in Ireland in 2018, following in the footsteps of his sire Dubawi in winning both the Bet365 Superlative Stakes and the Goffs Vincent O’Brien National Stakes at two, and he rates just 1lb below his sire as a two-year-old on 121.

“The leading Irish-trained juvenile was Aidan O’Brien’s Ten Sovereigns, who completed an unbeaten season with a defeat of Jash in the Juddmonte Middle Park Stakes and who ends the year on a rating of 120, which is 1lb ahead of the figure achieved by his sire No Nay Never at two.”

The Michael Bell-trained Pretty Pollyanna heads the juvenile fillies’ division on a perch of 116, having won the Prix Morny before disappointing in her final two starts of the season. Signora Cabello and Skitter Scatter are next best on 114.