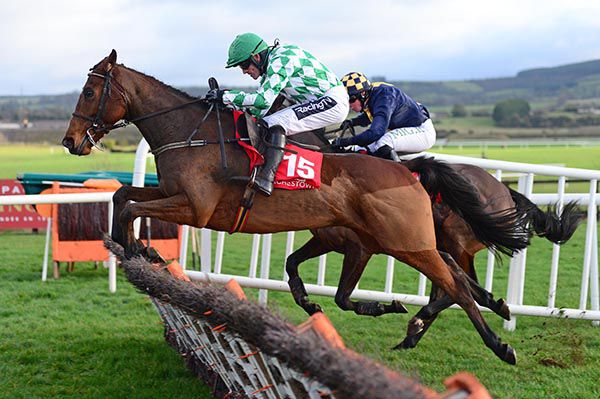 Tornado Flyer gets the chance to prove his worth at the highest level over obstacles in a cracking renewal of the Lawlor’s of Naas Novice Hurdle at the Co Kildare venue today.

The six-year-old was among the best of last season’s bumper crop, rounding off a Willie Mullins one-two-three in the Champion Bumper at Cheltenham before reversing the form with a couple of his stablemates to claim top honours in the Punchestown equivalent.

He was unsurprisingly long odds-on to make a successful hurdling debut on his return to Punchestown last month and did so in fine style to earn himself a shot at a race his trainer has won seven times — saddling four of the last five winners.

Patrick Mullins, assistant to his father, said of Ruby Walsh’s mount: “Tornado Flyer improved throughout last year. He was later into the yard than a lot of our horses last season and from February to March to April he got better and better.

“I thought he was quite impressive in Punchestown on his first run over hurdles. He won nicely and Ruby wasn’t hard on him.

“It looks a good race, but his bumper form sets the standard and we’re hoping he’ll be a Grade One horse over hurdles as well.”

Tornado Flyer is one of three Mullins representatives in a nine-strong field along with runaway Cork winner Come To Me (Paul Townend) and Getareason (Noel Fehily), who was last seen finishing second behind stable companion Easy Game in the Navan Novice Hurdle.

“Come To Me was very impressive in Cork and who knows how good he could be. I think he deserves a crack at it,” Mullins junior added.

“Getareason is going to have to step up, but I remember McKinley causing a bit of a shock in this race a few years ago (won at 33-1 in 2015), so it’s not impossible.”

Gordon Elliott is double-handed in his bid for a second success in the race, following Death Duty’s triumph in 2017. Battleoverdoyen was snapped up for £235,000 after winning an Irish point-to-point and has been seriously impressive in winning a Punchestown bumper and a Navan maiden hurdle this winter.

Elliott said: “Battleoverdoyen has been in great form since Navan and this was the obvious race to aim for with him.

“He was good over two miles last time, but he always struck us like a horse who would be at his best over longer trips so the race at Naas looks an ideal distance for him.

“This is a big step up from his maiden hurdle, but I’m very happy with him and I think there is more to come from him. Hopefully he’ll run a big race, but this does look like quite a strong renewal.”

Battleoverdoyen is joined by fellow Cullentra inmate Commander Of Fleet, who looked a top-class prospect when winning the Goffs Land Rover Bumper at Punchestown last April and maintained his unbeaten record on his hurdling bow at the same track.

However, he needs to bounce back from a slightly disappointing effort in the Royal Bond at Fairyhouse.

“Commander Of Fleet just found two miles a little on the sharp side last time. He won his maiden hurdle over this trip and I think he will be much happier coming back to this distance,” said Elliott.

“He’s got to improve if he is to be closely involved here, but he is definitely capable of improving on what he’s shown over hurdles so far.

“It’s a valuable Grade One race and you want to have a strong hand in these type of races.” Lone Wolf steps up in class for Joseph O’Brien after winning at Fairyhouse little over a month ago.

O’Brien said: “He’s in good form and I was pleased with his win at Fairyhouse last month. I’d expect him to improve for that run and he will enjoy the longer trip of Sunday’s race.

“He did have a run over hurdles in a decent race at Punchestown last season so that should also help him in terms of experience.”