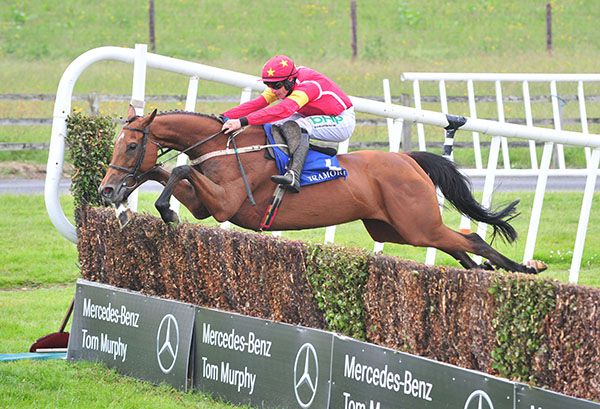 Having won the previous contest aboard In A Pinch Paul Townend quickly doubled his tally on Contingency in the Sands Hotel Tramore Mares Beginners Chase.

Second in a fiercely competitive handicap hurdle at the Punchestown Festival on her last start, the Willie Mullins trained six-year-old was expected to deliver this afternoon.

Sent off the 2/5 favourite, on what was her debut over fences, the daughter of Champs Elysees raced in third and wasn't fluent at times.

She improved to the front before two out and soon went clear, going on to score easily by eight lengths. Feeling The Love (5/1) finished second under Jody McGarvey for Jessica Harrington, while the front-running Mega Mindy was another eight lengths back in third.

Mullins said afterwards: "She was grand and jumped well enough. Once they changed pace it took her a while to adjust, but got going then over the last two.

"When Shark's mare (Mega Mindy) changed the pace up the hill it just caught her out, and it was just a typical novice mistake. She wasn't used to changing speed. She jumped that last two well enough.

"We will probably try and keep her novice chasing for the summer, if I can find more mares chases especially over a longer trip.