Treble for Foley as Camphor impresses 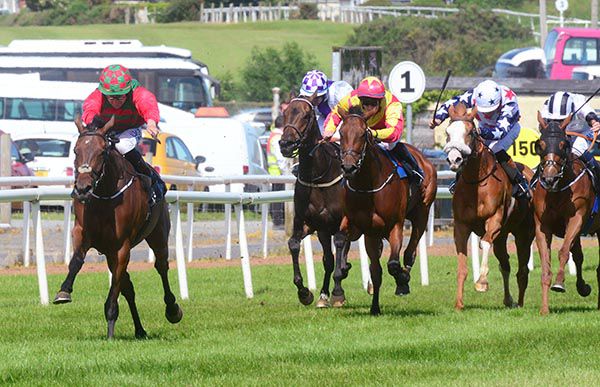 Camphor powered clear in the final furlong to run out an impressive winner of the Weatherbys Irish EBF Ulster Oaks at Down Royal, notching a treble on the day for Shane Foley.

This Camelot filly was backed into 6/4 favourite in the ten furlong contest and travelled sweetly to challenge crossing the road in the €40,000 prize.

Foley sent his mount on over a furlong from home and she really opened up in the closing stages to record a five-and-a-half length victory.

The winning trainer said: "Shane has always said she has a great turn of foot. She showed that the last day when she was in behind and she just came.

"She actually loved the bit of juice in the ground as well. She has gone on good to firm (but) she just travels very well on that ground."

Foley added:- “It's been a fantastic day. Ulster Derby day here is always a good day and to get a treble and win the two features is great. It's easy when you're riding good horses.

“She's a nice filly and won a good fillies maiden in Navan. It was her first handicap today against the older ones but she had been pleasing us at home.

“I did 8-7 today which wouldn't be normal for me but I got the weight down as I knew she's a smart filly.

“That was easy. She travelled around good and picked up well.”