Treble for de Bromhead as Visioman makes all 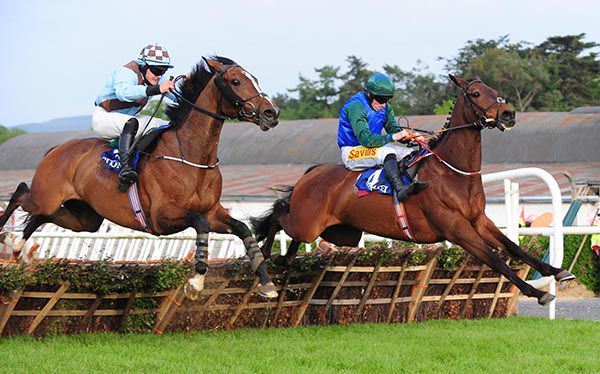 A good evening got even better for Henry de Bromhead, as Visioman completed a treble for him in the Clonmel Racecourse Supporters Club Guest Evening Rated Novice Hurdle.

The French bred son of Vision D'Etat won this race twelve months ago, but was later disqualified after a prohibited substance was found in a urine sample.

He failed to score in his next five starts, but was tried in competitive handicaps on his last three outings.

Back in novice company this evening, there was plenty of market support for the Alan Halsall owned six-year-old.

Available at 9/2 in early shows, he opened on-course at just 9/4, before going off the clear market leader at 13/8.

Sent straight to the front by Sean Flanagan, who was completing a quick double, the bay victor made all.

He was pushed along and pressed by Little Light on the run to two out, but found more from the last, going on to score by two and a quarter lengths.

Little Light was returned at 3/1 under Ryan Treacy for Joseph O'Brien, while early morning favourite Sassy Yet Classy (4/1) was eight lengths back in third.

The first two de Bromhead winners were Ourauldman and Megalomaniac Rachael Blackmore was due to ride all three, but was stood down after a fall from Game Present in the second.

de Bromhead said after this success: "It was a super ride by Sean and it's been a good evening. Fair play to the lads who subbed great for Rachael and it was obviously very unfortunate for her.

"He stays well. We were going chasing and I just felt he deserved to win a hurdle. There is a 116 or less beginners here (June 7th) but we'll see what the handicapper thinks as well. Otherwise we might look for a rated novice."

The Stewards enquired into an incident approaching the second last hurdle involving Little Light, ridden by R.P. Treacy, placed second and Visioman, ridden by S.W. Flanagan, placed first, where it appeared Little Light met with interference. Evidence was heard from the riders concerned. Having viewed the recording of the race and considered the evidence, the Stewards noted the explanations offered.