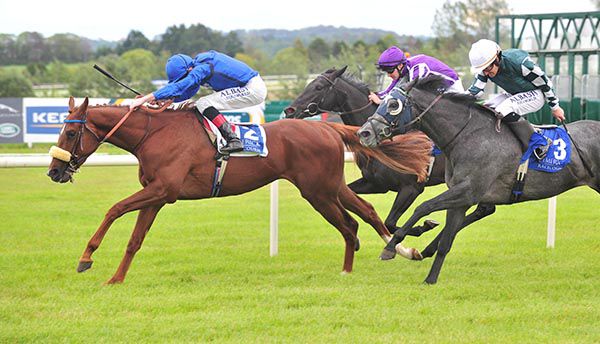 After winning the third on Canford Art Kevin Manning quickly doubled-up aboard Trossachs in the limerickraces.ie Maiden.

Ninth on debut at Leopardstown, the Jim Bolger trained New Approach colt finished fourth on his next two starts, and was sent off at 9/2 this afternoon.

He was ridden and edged to the front inside the final 200 yards, keeping on well from there to hold off the late effort of Elite Trooper Grey (5/1) by half a length. King Pellinor who was backed from 2/1 into 5/4 clear favouritism, attempted to make all under Donnacha O'Brien, but faded once headed inside the final furlong, eventually finishing a further length back in third.

Manning said: "He had a very good run at Tipperary two runs ago and the experience stood to him today.

"He has done it well and is a grand big horse. He is still developing and growing into his frame. He stays well, will get further and handles that good ground."

The winner is a full-brother to three time French winner Cascadian, who was narrowly beaten into second in the Group 1 Prix Jean Prat at Deauville last July.

K.J. Leonard, rider of Right Approval trained by Leonard Paul Flynn, reported to the Clerk of Scales that his mount hung badly left throughout.