Two for Coakley and some compo for Hogan and McAuley 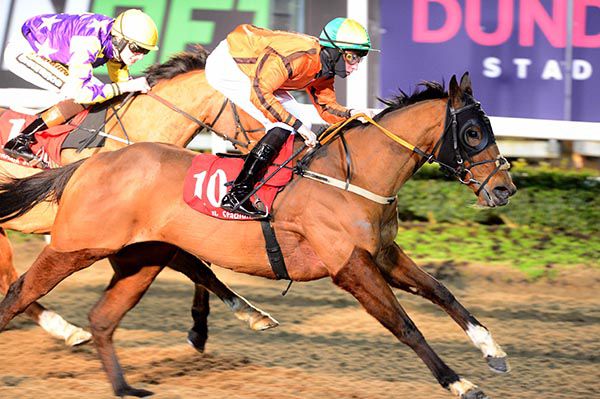 Owned by James McAuley and trained by Denis Hogan Lapilli travelled well in first-time blinkers and he eventually got the better of Lily's Prince (6/1) and favourite Ken's Sam's (9/2) by half a length and four and three parts of a length.

Coakley had taken the three-year-old mile maiden on Michael Halford's Isosceles at 7.00.

“That was great. The blinkers worked a treat,” said Hogan.

“Kevin Manning rode him the last day and he just arrived in front too soon. He said maybe to ride him a bit cold and we went for the blinds just to be sure.

“He's been a bit frustrating all year and we fancied him a lot of days during the summer. We thought he was well handicapped but obviously he was looking for the blinds.

“It's been a crossbar kind of night. We were second with the mare in the big race and the lads were unlucky in the first with Amanaat while Kerosin ran a bit flat.

“It was good to get a winner out of it as we had a good few runners.

“He's entered at Wolverhampton next Wednesday but I'm not sure if I'll go there. He'll probably come back up here.

“There is a 70 race over five here in two weeks time.

“It's great for the lads. They are good supporters of mine and have a good string with me now. They are all running well and long may it last.”

The Stewards interviewed D.W. O'Connor, rider of Lily's Prince, concerning his use of the whip in the latter stages of this race. Evidence was heard from the rider concerned. Having viewed a recording of the race and considered the evidence the Stewards were of the opinion that D.W. O'Connor was in breach of R10 (3)(f) by using his whip with excessive force and R10 (4) by failing to give his mount time to respond to the whip. Having considered his previous record, the Stewards suspended D.W. O'Connor for 1 raceday.