Unexposed Heliac one to watch in Roscommon feature 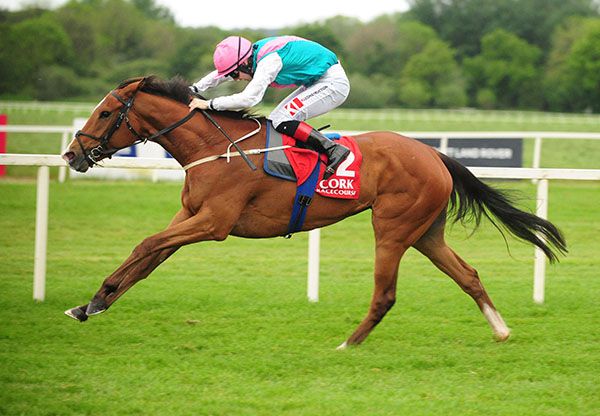 Heliac is one of 11 runners declared for the feature at Roscommon on Monday evening, the Irish Stallion Farms EBF Fillies Handicap.

Fourth to the Classic-placed Foxtrot Liv on debut at the Curragh last August, the Ger Lyons-trained daughter of Champs Elysees then went down by just a neck to Lightning Amber at Leopardstown.

She made the breakthrough on her first start as a three-year-old at Cork last month, and makes her debut in handicap company now.

Top-weight Missy Snossyboots disappointed in the Microsoft Cup and will be bidding to bounce back, while Elleanthus recent Curragh winner Latchet and Bercasa are other leading contenders.

Lyons tends to do well with his runners at Roscommon, and the Glenburnie handler saddles Lancastria in the Sherry Fitzgerald P.Burke Auctioneers Maiden.

A good second at Killarney recently, it will come as little surprise if the son of Cape Cross manages to go one place better now. Scorched Earth is the Lyons representative in the Peggy Guerin Memorial Handicap, with Colin Keane also aboard this chestnut colt.

A beaten favourite on his handicap debut at Cork, the blinkers that were fitted for the first time there are now removed.

The consistent Lyrical Attraction Noel Meade's Red Gerry and first reserve Meryems Way are others to consider in this competitive contest.

Robbie Colgan takes the ride on Red Gerry, and he will be aboard Danehill Guest in the concluding Roscommon Racecourse Handicap. The Sheila Lavery-trained four-year-old was a good second at Tipperary last week.

The Ladies Day Monday 8th July Apprentice Handicap has been divided, with Silver The Fixer Althib and Harry Speed a few for the shortlist in the first split.

The John McConnell-trained Kudbegood has been knocking on the door of late, and might be able to get his head in front in the second divide. Glow Worm has three solid efforts to her name, and appears the one to beat in the Foran Equine Irish EBF Auction Maiden, while Royal Court might get off the mark in the opening Roscommon Claiming Maiden.