Valeria Messalina another advert for the barrier trials 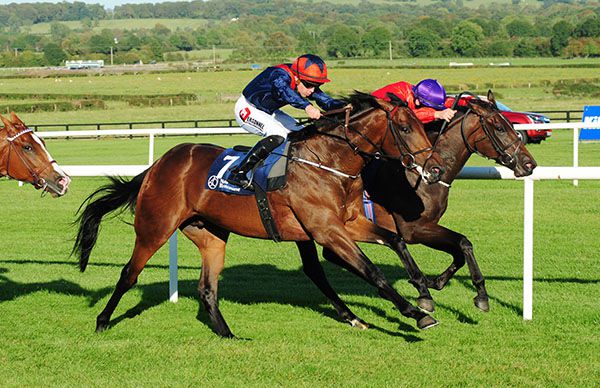 We won’t see the recently retired Group One performer Skitter Scatter in the Rogers silks again but the red with purple cap livery could continue to be carried with distinction by Valeria Messalina The nicely supported 9/1 shot took the Irish Stallion Farms EBF Maiden at Naas.

After several near-misses earlier, Jessica Harrington got on the board with the Tom Madden-ridden Valeria Messalina. It was only just though, as the daughter of Holy Roman Emperor held on by a nose.

These were all first-time-out, but Valeria Messalina, like earlier winner on the card, Eloy D’amerval, took a barrier trial at this venue earlier in the month.

Valeria Messalina was always to the fore. She was all out close home and barely contained Now The King (2nd in a barrier trial himself).

“She won a barrier trial here, and is very like (half-brother) Pincheck as she really wants it. She puts her head down and tries," said Mrs Harrington.

“She’s a smashing big filly and we’ll see how we get on from here. I’d say she’ll run again this year. She knew where she was and she knew where the winning post was.

“It’s great to have a winner for the Rogers’ that’s homebred in Airlie Stud.”

The Stewards informed Patrick J.Flynn, trainer that Accessory would have to be recertified before being declared to run from stalls again.