Veneziano Springs back to winning ways 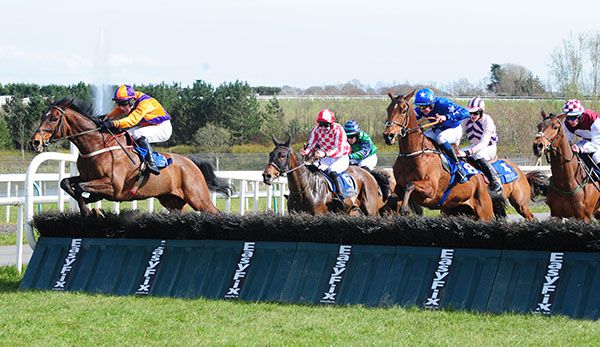 Veneziano Springs bounced back to form to claim the Adare Manor Opportunity Handicap Hurdle at Limerick.

Terence O'Brien's charge had been pulled up at Gowran on his last outing in late January when sent off a well-backed favourite.

There was money again for the French-bred today (12/1 into 6/1) and he did the business this time under Liam Gilligan.

Having led early he was headed after the fourth and regained the advantage with a good jump at the second last.

The seven-year-old battled gamely on the run-in to maintain the lead, holding Mutadaffeq by a neck.

"I was kind of expecting that as I thought he was a crazy price at 12/1 this morning. I didn't back him because I don't back horses, unfortunately today, but over my career I'd be better off!” said O'Brien.

"He works really well at home and has a bit of class about him but always finds a way to get beaten. He is a good actioned horse with plenty speed and I always felt he was a better horse than this class.

"We'll mix and match between fenced and hurdles now."

The winning trainer also had an update on Arkle third Articulum: "I was going to go to Aintree but he wasn't sparkling since Cheltenham. He ate up fine and I was going to enter for Aintree but is dead in himself and won't run."