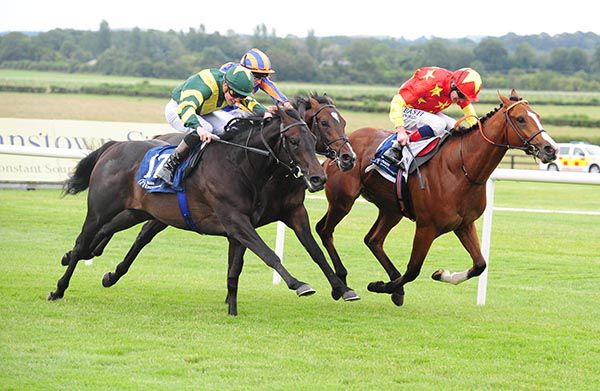 Joseph O’Brien ran three in the Irish Stallion Farms EBF Maiden at Naas and his first time out Vitalogy (25/1), under Shane Crosse, looked useful when getting up close home to defeat a couple of rivals with good form in the book.

The son of No Nay Never, who cost 120,000 Euros at the Arqana Breeze-Up Sale in May, finished off his race very strongly to collar long-time leader Arranmore and the odds-on Harpocrates (fifth in the Chesham Stakes previously).

Half a length and a head were the margins, and for last year’s champion apprentice it was winner number 15 of the current campaign.

Winning trainer Joseph O’Brien said : “We thought he’d run a nice race but mine first time out are usually raw. When the penny dropped with him in the last half a furlong he quickened up very well.

“He looks an above average horse and I’d say that was a decent enough maiden. It was a messy race as they hacked to halfway and then sprinted from there. He will learn plenty as well.

“He will have to go into a Stakes race now. I had it in my head to go seven with him next time but looking at that he doesn’t need to go seven.”