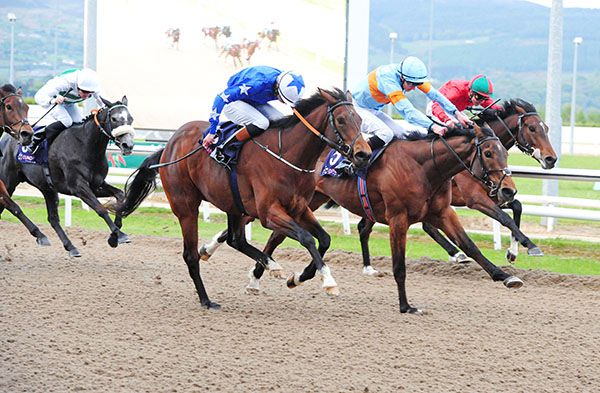 The judge couldn't separate Vivax and Aneczka as they dead-heated in the Irish Stallion Farms EBF Median Auction Maiden.

Vivax was completing a double on the card for Joseph O'Brien and Donnacha O'Brien, with this one returned at 6/4.

Joseph O'Brien was himself completing a treble on the day, having also scored at Punchestown with Gardens Of Babylon

A E50,000 purchase as a yearling and related to a whole host of winners, Vivax was a fine fifth on his debut at Gowran last month.

Aneczka on the other hand was returned at 33/1, with Oisin Orr aboard this daughter of Elzaam for Clare Cannon.

Having disappointed on her first two starts, she did show some promise at Leopardstown in October, before again finishing down the field on her next two outings.

Five horses were still in with every chance from the furlong pole, but it soon revolved around two, with both Vivax and Aneczka giving it their all to the line.

Ultimately the had to settle for a share of the prize money, with newcomer A Wave Of The Sea (7/1), also trained by Joseph O'Brien, running a fine race on debut, another half a length back in third. Granularity was sent off the 5/4 favourite, and she finished fifth.

Oisin Orr, said afterwards: "I thought I could have been up but I wasn't too sure.

"At least a dead heat I'd be happy enough with that, it's better than second so I'll take that.

"She had two runs here when she was a two-year-old and hadn't showed much. Today over the further trip I think helped her, she jumped and travelled a lot better today. When I did ask her, she picked up well.

"Hopefully she will keep improving. I don't think she was doing too much when she did get to the front but that's the way."

The Stewards enquired into an incident approximately one and a half furlong from home involving Granularity (GB), ridden by W.J. Lee, and Triple Nickle ridden by C.D. Hayes, where it appeared Granularity (GB) got struck on the nose by the rider of Triple Nickle. Evidence was heard from the riders concerned. Having viewed the recording of the race and considered the evidence, the Stewards were satisfied the incident was accidental in nature and took no further action.

W.J. Lee, rider of Granularity (GB), trained by W. McCreery, reported to the Stewards' Secretaries that his mount got a flick of another rider's stick on the nose approximately one and a half furlongs from home.