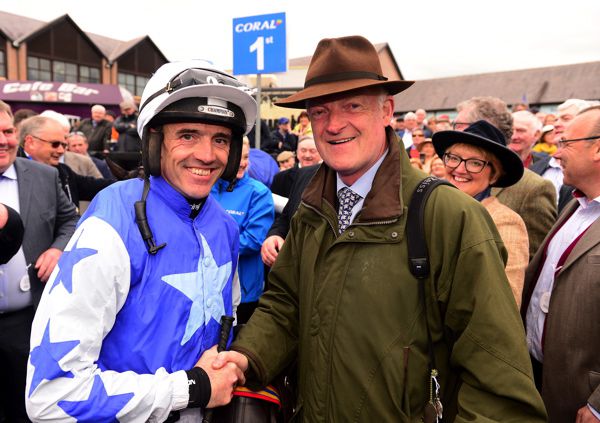 Ruby Walsh hopes to continue to play a part for Willie Mullins’ stable after he stunned the racing world when announcing his retirement from the saddle at Punchestown.

The 12-time champion Irish jump jockey signed off his glittering career by steering Kemboy to victory for the Closutton trainer in the Coral Punchestown Gold Cup on Wednesday.

Walsh was seen to wave goodbye to the crowd as Kemboy passed the post, and bows out having ridden over 2,500 winners and with more Cheltenham Festival successes to his name than any other rider in history.

He told Mullins of his decision as he dismounted, and news quickly spread to racegoers and racing fans everywhere.

“It’s been part of my life since I left school.

“We’ll have a chat about it, and see how it works out for everyone.”

Walsh explained why he believes he and Mullins had such a successful relationship.

“You’re always involved, and Willie likes input — you can see that with staff and the way the yard is set up and the system it works on.

“He’s ultimately in charge, but he does expect you to be thinking outside the box.”

The way Walsh’s last day in the saddle worked out provided him with the perfect finale.

“You’re hoping to find a fairytale way of getting out, and it was a great way to to do it,” he said.

“It was a great day, great that (wife) Gillian and the girls (daughters) were here.

“It’s a bit of a blur, but it was lovely to get such a warm send-off.

“But to me, it was more important to walk away on the big stage with a big winner — and I was lucky enough to be able to do that.”

Members of the Supreme Racing Club, who own Kemboy, could not believe their luck at being part of racing history.

Steve Massey, racing manager for the successful syndicate, said: “It’s absolutely unbelievable. I don’t think any of us saw it coming.

“Ruby is an absolute superstar and a fantastic horseman. To me, he’s the best National Hunt jockey there’s ever been.

“He’s a complete professional and a total gent, and it’s fantastic for him and his family that he’s gone out on a high.

“It still hasn’t really sunk in that he’s retired, and for him to ride his last ever winner in our colours is just incredible.

“It’s a day none of us will ever forget.”

Arguably the greatest horse Walsh ever rode was Kauto Star — record-breaking five-time winner of the King George VI Chase at Kempton and the only horse to regain the Cheltenham Gold Cup.

Smith said: “Ruby did a wonderful job for me as an owner. He did incredibly well, coming over from Ireland to ride Kauto and Master Minded and Big Buck’s.

“He’s a real sportsman and a professional jockey of the highest order — he always rode so well under pressure.”

Another owner for whom Walsh enjoyed multiple big-race wins is John Hales — including two Punchestown Gold Cups on Neptune Collonges and the Queen Mother Champion Chase on Azertyuiop.

“When he went past the post yesterday he signalled his five Punchestown Gold Cup wins, and two of those were on Neptune Collonges.

“He’s a great guy and a great jockey. He’s suffered some horrendous injuries, but he’s always had the guts to come back and carry on.”