Walsh steps in for winning ride on Shark 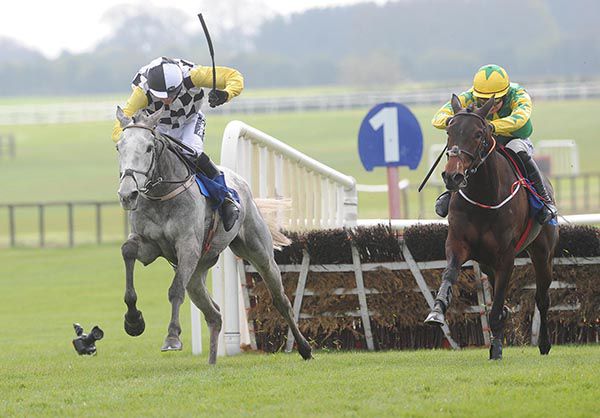 Great White Shark got off the mark on her fourth start over flights, as she took the opener at Fairyhouse this afternoon, the Irish Stallion Farms EBF Mares Maiden Hurdle

A dual winner on the level for James Fanshawe, the grey daughter of Le Harve filled the runner-up spot on her last two starts at Thurles and Navan respectively.

Having opened on-course at 2/1 today, she eventually went off a well-backed 6/4 favourite in the colours of owner Malcolm Denmark.

Settled behind the leaders by Ruby Walsh, deputising for Paul Townend who was reported to be stiff after being unseated from Pleasant Company in the Grand National yesterday, she was poised to challenge in fifth as they approached the straight.

The five-year-old victor was ridden and came with her effort between horses approaching the last, hitting the front on the run-in, before going on to see off the effort of Rhythm Divine (7/1) by three parts of a length.

Donagh Meyler was aboard the runner-up for Tom Gibney, while Tens Or Better (4/1) was another seventeen lengths back in third.

Walsh said afterwards: "She kept going well. I'd say the good ground helped her and she stays well."