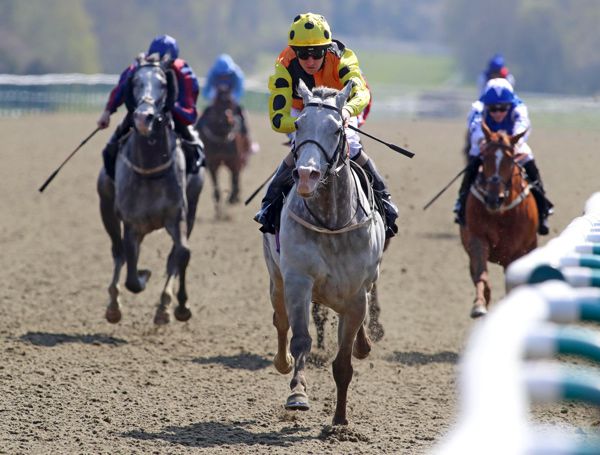 Watersmeet gained a much deserved success when making it third time lucky in the Betway All-Weather Marathon Championships Conditions Stakes at Lingfield.

Having finished second in 2017 and third 12 months ago, the Mark Johnston-trained eight-year-old finally hit the jackpot in the two-mile prize.

Despite missing the break, the son of Dansili, who usually front-runs, came with a strong challenge from off the pace before being kicked on by Joe Fanning around a furlong from home to cross the line two and a quarter lengths clear off odds-on favourite Amade.

Johnston said of the 7-1 winner: “I’ve often thought he has deserved a big one on the turf or all-weather. He has actually run three times before in these finals, as he ran in the mile-and-a-quarter race and has been twice placed in this race, so it was his turn.

“He took the blind off too early, hit the gates and sat back on his hocks and missed it, so he was back in the field and Joe said he had to think again.

“He got lucky when the favourite went round the outside, so he thought he would follow that. Joe didn’t know himself how far he won by.

“I didn’t think his chance had gone, but I hate seeing them go wide round the bend, although at the same time I wanted Joe to get up there a bit more. All’s well that ends well.”

Looking to future engagements, Johnston pointed towards another tilt at the Northumberland Plate at Newcastle in June for the winner, a race in which he finished fourth in last year.

He said: “I don’t know how many times he has run in the Northumberland Plate before, but he should be well capable of winning a race like that.

“Those races have got to be for him as he is eight years old and there is nothing else for him.”

Ryan Moore rode the perfect race from the front in making all aboard Heavenly Holly in the Ladbrokes All-Weather Fillies’ And Mares’ Championships Conditions Stakes.

Although faced with the widest draw in stall 12, the three-times champion jockey quickly got the Hugo Palmer-trained four-year-old over to the inside to take up pole position in the seven-furlong event.

Moore stole a few more lengths rounding the home turn with an injection of pace on the 9-1 chance, before holding the fast-finishing Island Of Life at bay by a length.

Palmer said: “She got beat over seven and a half furlongs last time in a Listed race and she might have got beaten three-quarters of a length today if it had been another half a furlong.

“The obvious target is to come back here on Derby trials weekend for the Chartwell. This is a real testament to patient owners. So many people push trainers to run horses before they are ready, and these guys have been so unbelievably patient.

“They have been so patient and have now been rewarded, which is fantastic.”