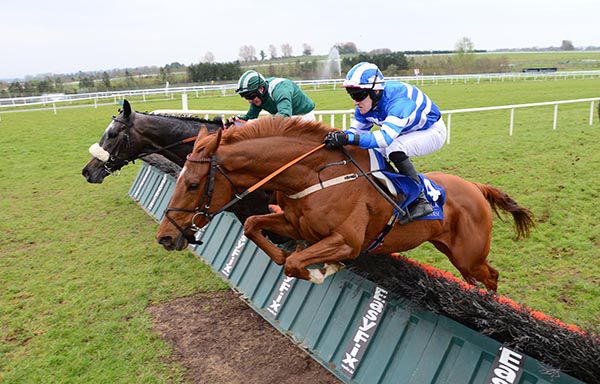 Cork handler Rodger Sweeney would appear to have a progressive young horse on his hands as his home bred Whereyounow (7s into 6s) went back-to-back in the Book Online At www.limerickraces.ie Handicap Hurdle.

Coincidentally enough the five-year-old won on another student's day, at Cork last month, and here Philip Enright was aboard in the dual Foxhunter winning silks of Salsify.

Sweeney's wife Joan brought the Kayf Tara mare Shreddin Fiftys to local stallion, Carlotamix, at Coolagown Stud in Fermoy, and the resultant Whereyounow ('missed' the last here) is really getting the hang of what is required, making it two from two for 2019, upped to three miles on this occasion.

After he'd beaten the sweet-travelling Glenmalure Lodge by a length and a quarter, with the pair nine lengths clear of third home, Young Dev Sweeney said: "He improved a good bit from Cork and stepping him up in trip slowed down the boys in front a bit. It gave him a chance to jump a bit better and he did it well in the finish.

"Next, he'll run in the weakest race I can find. Anyway he is keeping the thing going!"

The Irish Horseracing Regulatory Board Veterinary Officer examined Thegoaheadman trained by Mrs John Harrington, at the request of the Stewards and reported the animal to be post race normal.

The Irish Horseracing Regulatory Board Veterinary Officer examined Leave Your Mark trained by Joseph Patrick O'Brien, at the request of the Stewards and reported the animal to be post race normal.

J.W. Kennedy, rider of Dark Decade trained by Gordon Elliott, reported to the Clerk of Scales that his mount made a bad mistake at the third last hurdle.

P.D. Kennedy, rider of Thegoaheadman trained by Mrs John Harrington, reported to the Clerk of Scales that his mount was flat when he came off the bridle.

The Stewards ordered the withdrawal of Napoleon Blue trained by Adrian Murray, for failing to lodge the passport in accordance with the provisions of Rule 90 (i).