Witness back in Fashion at Fairyhouse 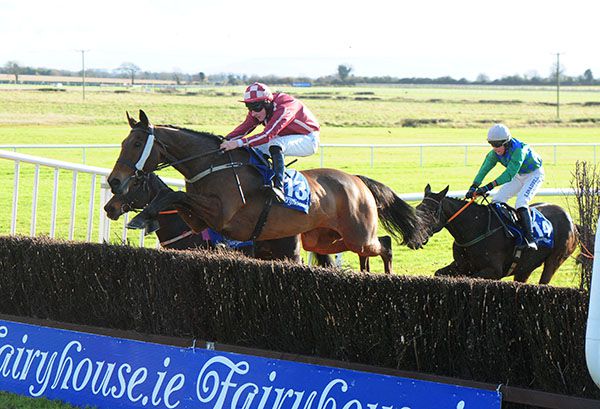 The veteran Witness Of Fashion stormed home to claim his fourth success around his local track Fairyhouse this afternoon.

Pat Rooney's charge had finished sixth on his seasonal debut here a week ago and bounced back to winning ways in good style in today's extended two-mile-seven handicap chase.

Stable-mates Enduring Love and Ilsnepasserontpas fought it out before the last but both were trumped as Witness Of Fashion swept through under Trevor Ryan.

A big leap at the last settled matters as he went on to record a four length success at odds of 11/1.

33/1 shot Turndownthevolume stayed on well on the run-in to get up for second close home ahead of Enduring Love.

It was a first win for Witness Of Fashion since he scored at Leopardstown in March 2018.

Rooney said:- “It’s nice to do it at the local track. He minded himself last week and came out of the race well. There could be a race for him here again on New Years Day.

“I ride him myself at home most of the time and he’s very straight forward. He’s a pleasure to ride, a real gentleman.

“He’d no problem this year at all. Usually he gets some sort of niggle but everything was very straight forward.

“You don’t know if they still have the appetite still at his age, and we might get another one out of him.”