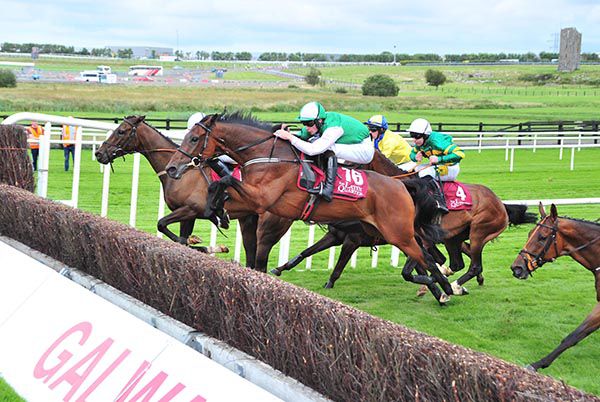 Exciting novice chaser Zero Ten is set to return to action at Naas on January 5th.

A winner of a point-to-point in his early days, the Emmet Mullins trained gelding has since gone on to claim a bumper and three hurdles, winning the valuable Connolly's Red Mills Auction Final at the Punchestown Festival in May.

He justified odds-on favouritism when scoring over fences at Galway in July and now has the Irish Stallion Farms EBF Novice Chase at Naas as his next target.

"Zero Ten will hopefully come back at Naas for a novice chase on January 5th," Mullins said.

"He schooled on Friday morning, he has a nice bit of work under his belt and seems fairly well in himself."

Zero Ten is owned by Mrs Antoinette Mee and she also has Russian Diamond with Mullins.

A bumper winner at the Galway Festival in July, the Morozov bay is likely to make his debut over flights at Down Royal on St Stephen's Day.

"Russian Diamond is the only runner I'll have on St Stephen’s Day," Mullins revealed.

"He won a bumper on the Monday night at Galway and he'll run in an Auction Maiden Hurdle at Down Royal. He has been in good form since Galway.

"I'd say the last time he came off the ground was when giving Zero Ten a lead over fences before Galway. I'm sure we'll find something to give him a pop over but we're very happy with him.

"We'll try to get him qualified for the Red Mills Final at the Punchestown Festival, the race Zero Ten won last year. It's a big pot and a big series so fingers crossed lightning might strike twice."