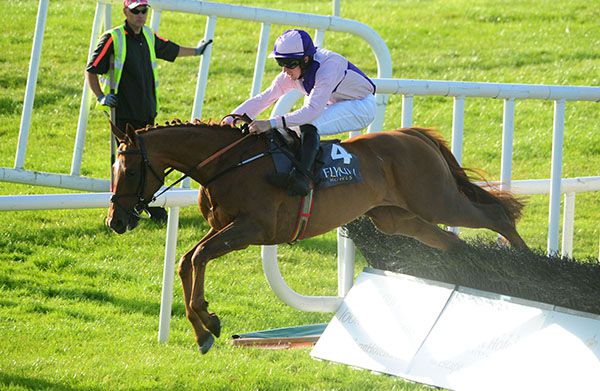 Zoffalee landed his second feature race of the week, as he took the Flynn Hotels Handicap Hurdle, the highlight on the opening day of the Tramore Festival.

Successful at Ballinrobe on Monday, the Andrew McNamara trained four-year-old was well-fancied to follow-up this evening and was sent off the 5/2 favourite under Dillon Maxwell.

Settled behind the leaders, the chestnut son of Zoffany took closer order from three out and was pushed along to lead from the next, keeping on well from there to score by two and a half lengths. Lady In Lavender (8/1) kept on well take second under Denis Hogan, while Penny Out (8/1) was another four and a half lengths back in third, with Mikey Hamill aboard this one for John Kiely.

"That was brilliant. It has been a fairly profitable week for him now, that's two nice pots that he has landed," said McNamara.

"I suppose we will have to head to the Lartigue (at Listowel) with him after that. He went up six for the other night so you'd imagine that he will go up something similar again. I don't think he is too far ahead of the handicapper anymore. The Lartigue is worth so much we’ll have to give it a go.

"We've only had six horses to run over jumps for the summer and four of them are after winning six races. If every summer was like that we'd be happy enough. Hopefully we'll squeeze a few more out of them before it's over.

"There was a bit of a cut in the ground Ballinrobe but he probably wouldn't go on heavy. The Lartigue will probably be the biggest pot that he will ever run in in his life so we might take a chance on it anyway. regardless of the ground."

The Irish Horseracing Regulatory Board Veterinary Officer examined St Lawrence Gap trained by Eoin Doyle, at the request of the Stewards and reported the animal to be post race normal.

The Stewards received a report from the Clerk of the Scales, Mr. W. Flemming, that D.J. O'Keeffe, rider of St Lawrence Gap, had failed to weigh in having finished seventh. Evidence was heard from the rider concerned, who accepted that this was the case and apologised for the error. Having considered the evidence, the Stewards disqualified St Lawrence Gap from seventh place under the provisions of Rule 230(ii) and severely cautioned D.J. O'Keeffe concerning his future responsibilities in this regard.

The Stewards fined Michael G. Kennedy, trainer, E65 for failing to fit the declared head gear in full to Touch Of Gold prior to entering the parade ring.