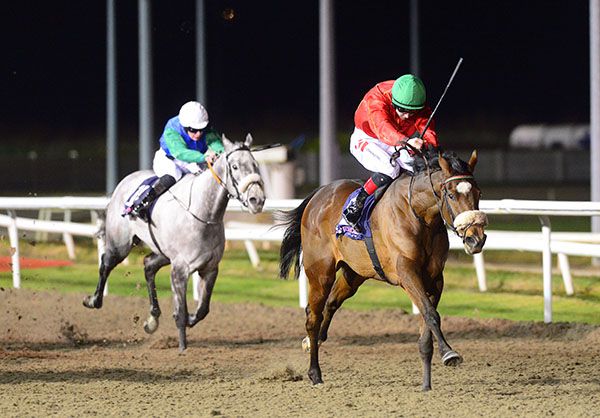 Outside Inside leading
© Photo Healy Racing

Colin Keane completed a double at Dundalk today as the former Champion Jockey landed the Fundraise At Dundalk Stadium Rated Race on the Jack Davidson trained Outside Inside.

Keane was successful on the Ger Lyons trained Phoenix Open in the earlier Claimer and steered Outside Inside, a daughter of Holy Roman Emperor, to a length and three parts win over Will Be King.

Davidson later commented “she’s been consistent without winning so it’s great to get that.

“I’m delighted for the filly and for her owner Garrett Freyne. It’s the first winner I’ve trained for him and a good way to start the new year.

“When I saw the draw I said we might as well get one of the best in the business because we’ll need all the help we can get. It was great to get Colin and you just saw a master at work there.

“We planned to ride her a little bit cold from off the pace and come with one clean run. We rode her for luck and we got that bit of luck.

“She was doing everything well within herself in the early part of the race and she picked up the bridle and ran all the way to the line.

“She likes it up here and that will do her confidence the world of good. We’ll have a look at the programme book and providing she’s kicking and screaming at home we’ll go again.”