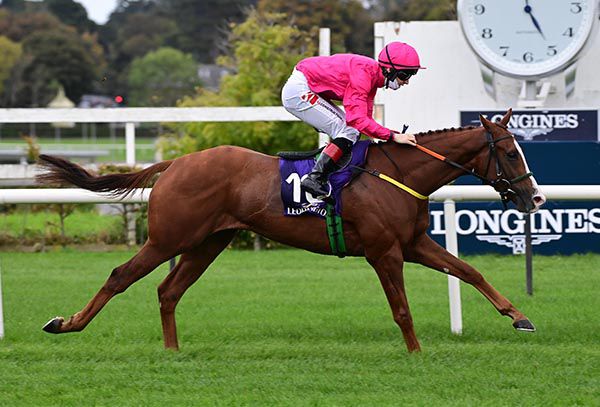 Keane, earlier on the mark for his boss Ger Lyons on Georgeville in the Listed Trigo Stakes, took the reins on Lunar Power for Noel Meade in the Carmanhall Handicap.

Britzka and Magic Word chased home at distances of six lengths and three parts of a length, but there was just no living with the 4/1 scorer as he brought a sequence of four second placed finishes to an end.

“That was amazing. He’s been running all year with blinkers and cheek-pieces but we took everything off today and maybe he’s better off without them," said Meade.

“I don’t know why he seemed to be so much better today. He picked up and quickened very well. Going even further will probably suit him better.

“I’d imagine he’ll try jumping again. He’s basically a summer horse so he’ll have a break over the winter.”

S. Foley, rider of Goodnight Kiss trained by Mrs John Harrington, reported to the Clerk of Scales that his mount leaned right throughout.

C.D. Hayes, rider of Female Approach trained by Noel Meade, reported to the Clerk of Scales that his mount slipped on the first bend.

M.P. Sheehy, rider of Monty's Way trained by Joseph Patrick O'Brien, reported to the Clerk of Scales that his mount slipped on the first bend.

S.T. McCullagh, rider of McPherson (GB) trained by Mrs John Harrington, reported to the Clerk of Scales that his mount hung left throughout.

There is no finer sight than a bold jumping front-runner clearly having the time of their lives over the Grand National fences and it is even better when they hold on for victory like Snow Leopardess managed in the Unibet Becher Handicap Chase at Aintree.

Edwardstone is king in Henry VII at Sandown

Protektorat burst into the Cheltenham Gold Cup picture with a dominant display in the Unibet Many Clouds Chase, providing Bridget Andrews with the most notable victory of her career into the bargain.

Bryony Frost left behind an emotional few days to pilot Greaneteen to a superb victory in the Betfair Tingle Creek Chase at Sandown for trainer Paul Nicholls.