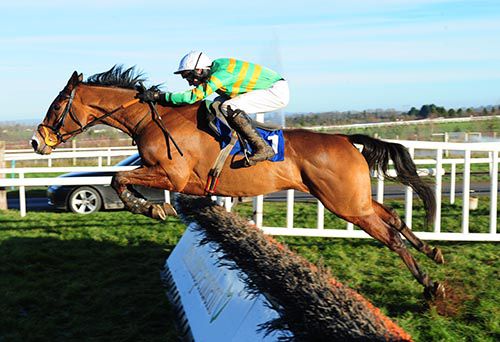 The Grade 2s Fortria Chase and Lismullen Hurdle take centre stage at Navan today but the supporting card does also feature the potentially informative Grade 3 At The Races ´For Auction´ Novice Hurdle and the chasing debut of high class hurdler Kitten Rock.

Thomas Hobson's final British Flat performance saw him win from a mark of 97 and while a faller on debut at Listowel in June, did overcome jumping errors when winning next time out at the Galway Festival in July.

Triple Bumper winner Tycoon Prince will be aiming to continue the recent fine run of Gigginstown House Stud and he himself was an easy maiden hurdle winner 12 days ago.

The presence of Kitten Rock in the Crystalski.ie European Breeders Fund Beginners Chase is very notable. The Edward O'Grady trained runner is one of J.P. McManus owned geldings in the race and the Champion Hurdle-sixth is likely to take plenty beating on fencing debut.

Elsewhere Gold Cup winning trainer Jim Culloty will be aiming to end a recent winnerless spell in the St Johann Ski Resort Tirol Handicap Hurdle. His Mighty Concorde has form figures which read '42223' and a reproduction of his recent form should give him every chance.