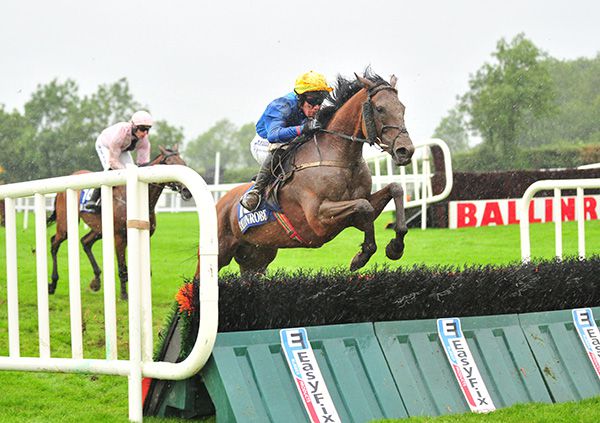 Northern Emperor sprang a 20/1 surprise in the Corrib Oil Handicap Hurdle, as he got up in the closing stages to deny the front-running Le Hachette.

Without a win in thirty-four previous starts, the Val O'Brien trained victor did run some good races in defeat earlier in the summer.

Settled behind the leaders, as Le Hachette attempted to make all, he took closer order in second with a circuit to race.

Ridden from the last he gradually closed on the long time leader and got to the front inside the final 100 yards, keeping on well from there to score by half a length.

Le Hachette (11/4) ultimately had to settle for second under Darragh O'Keeffe for John Ryan, while She'stherightone (12/1) was a further fourteen lengths back in third.

The Willie Mullins trained Herbiegoesbananas was sent off the 9/4 favourite and he finished a well-beaten seventh under Paul Townend.

"That was his (Adam Short) first ride for me and he rode an intelligent race," said O'Brien.

"I was a little bit disappointed with the other lad (Spittal Field). I expected more from him.

"That's the way it goes though and I'm just happy to get the win."

* The Irish Horseracing Regulatory Board Veterinary Officer examined Herbiegoesbananas, trained by W.P. Mullins, at the request of the Stewards and reported the animal to be post race normal.

* R.A. Doyle, rider of El Vasco trained by Conor O'Dwyer, reported to the Clerk of Scales that his mount did not act on the ground.

* P. Townend, rider of Herbiegoesbananas trained by W.P. Mullins, reported to the Clerk of Scales that his mount never travelled.

* The Stewards wished to interview A.W. Short, rider of Northern Emperor, concerning his use of the whip in the closing stages of this race. A.W. Short confirmed to the Stewards that he had three or more previous breaches of Regulation 10 since the new whip Regulations came into effect. Having considered the rider's acceptance of his disciplinary record in relation to Regulation 10, the Stewards referred the matter to the Referrals Committee for consideration under the provisions of Regulation 10.6.