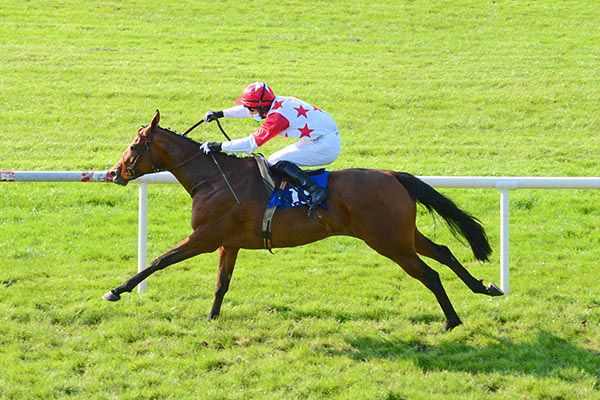 The Philip Fenton trained Red Iron made the breakthrough on her fifth start, as she claimed the last at Tramore this afternoon, the Irish Stallion Farms EBF Mares Flat Race.

Fourth on her last three starts, the daughter of Shirocco was sent off at 12/1 in the colours of DRK Bloodstock Limited.

Settled in mid-division on the outer by Eoin O'Brien, the bay four-year-old took closer order from the four furlong pole.

Switched to the inner as they began the climb for home, the winner got to the front just inside the final furlong and kept on well from there to register a two length success.

She's A Cracker (16/1) ran on well to take second, while Class Bishop Lady (2/1f) was a further neck back in third under Jamie Codd for Gordon Elliott.

Fenton said afterwards: "We were looking at an unplaced maiden hurdle if she hadn't won today.

"She had some nice form to her name and suffered a bit with sore shins and little things like that. Things came together for her today.

"I'd say the quick ground was a big help and she stayed wide on the faster part of it. I'd say she'll come back here for a maiden hurdle next month.

"We haven't enough in at the moment and it's a big struggle but we'll make the best of it."