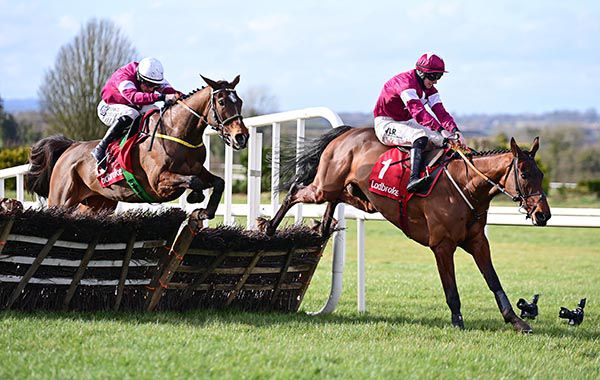 Tiger Roll's Aintree treble bid was scuppered last April by lockdown and today had his first run since pulling-up at Cheltenham last October.

Unconsidered at 11/1 under Keith Donoghue, Tiger Roll failed to land a blow today as he eventually faded, trailing in last of the six runners.

At the business end of the €35,000 race, two other Gigginstown House Stud owned runners Beacon Edge and Fury Road fought out the finish with Beacon Edge, under Sean Flanagan, scoring a neck success.

Following the race winning trainer Noel Meade reported “he (Beacon Edge) had a colic at Christmas, spent nearly a week in Kildare (veterinary clinic) and he was just wasn't himself in Naas last time, but he's a fair horse.

“I wondered about him getting the trip but he stays.

“He's a very nice horse. Michael (O'Leary, owner) had it in his head that he'd go to Liverpool for the two-and-a-half mile race but he's in the Stayers. We have Diol Ker as well and we'll see what turns up in it.

“He was meant to go over fences this year but when we thought about what was coming out over fences we thought we might be as well staying where we are.

“We got it right the way it looks at the minute anyway. That was a nice prize today and a nice race to win.”

Tiger Roll's trainer Gordon Elliott was somewhat downbeat following the race and reported “Keith (Donoghue) said he travelled well to the third last, in horrible ground, and just got tired.

“It's still all systems go for Cheltenham. Keith said he was happy with him but he just got tired in the ground. He'll be okay.

“Of course you want him to run better but he hated that ground.”