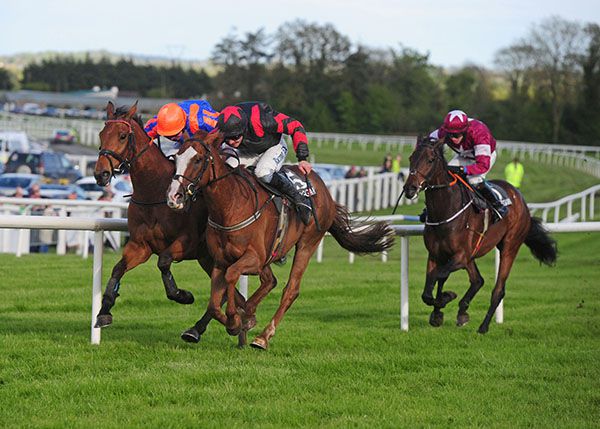 Emmet Mullins hopes the globe-trotting Tornado Watch can do him proud again in the Betfair Exchange Trophy Handicap Hurdle at Ascot on Saturday.

The nine-year-old gave his owner-trainer an experience of a lifetime when finishing second to fellow Irish challenger, Gordon Elliott’s Jury Duty, in the Grand National Hurdle at Far Hills in America in October.

Tornado Watch showed he had got over those exertions — and the long journey — by finishing a fine fifth of 21 in a valuable handicap hurdle at Fairyhouse won by Wonder Laish three weeks ago.

“He’s been a great horse. He’s really done wonderful things for me this year,” said the Co Carlow trainer.

“He’s won a few races, and we got a trip to America out of him — which was a once-in-a-lifetime experience.

“He came back and ran well the last day in Fairyhouse. The pace and things didn’t work out for him, but we hope he’ll run the same sort of race and be bang there again on Saturday.

“Fingers crossed. He wears his heart on his sleeve. He’s a real old warrior, and I hope he’ll turn up for a battle again.”

Jolly’s Cracked It bids to take his tally at Ascot to five wins from seven starts and bridge a three-year gap when he attempts to defy top-weight.

The nine-year-old made a triumphant comeback there four weeks ago, in his first race for nearly two years.

That was only Jolly’s Cracked It’s second run since he dead-heated with Sternrubin for this prize in 2015.

Trainer Harry Fry has been delighted with the horse since his return.

“Jolly’s Cracked It came out of his victory at Ascot in good form,” he said.

“It was great to see him roll back the years after 706 days off with a tendon injury.

“We had been pleased with him at home, but he still had it to do giving weight all round to some decent rivals. It was great to see the patience of his owners rewarded.

“Hopefully all his problems are behind him now, and we can look forward to making the most of the rest of his career.”

A mistake two out put paid to any chance Nietzsche had in this race 12 months ago — but he could be a different proposition this time, judged on his victory in the Greatwood Hurdle at Cheltenham.

“It was great to win a big handicap hurdle like that at Cheltenham, and Nietzsche has come out of it in good form,” said trainer Brian Ellison.

“A lot of juvenile hurdles lose their way in their second season. He was the same — and we didn’t know why, because he used to work so well.

“This year, he has returned to form, and the tongue tie we put on him also helped.”

Martin Keighley is optimistic Forecast can continue on an upward curve after following a good second place to Paisley Park at Haydock with a 15-length success on heavy ground at Lingfield.

“Forecast is doing really well. Since he had a breathing operation, his form has improved with every run,” said Keighley.

“I am not quite sure what he beat last time at Lingfield, but he did it very easily. He handled the very soft ground well at Lingfield and hopefully a strongly-run two miles around Ascot should suit him well.”

“He’s done nothing wrong. He’s been first or second in nearly all his runs. We’re hoping for a big run,” said the Naunton trainer.

“He’s proven over further. If it keeps raining, the ground will be quite testing so that would be good and they should go a good pace.”