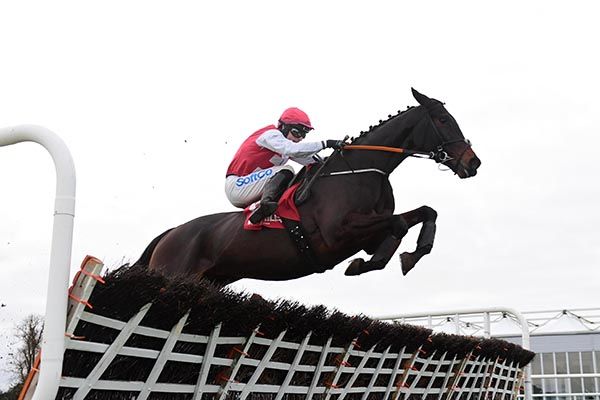 The five-year-old gelding, who was runner-up in a Grade 2 bumper won by Facile Vega at the Dublin Racing Festival, readily took the honours on his second start over flights.

He travelled powerfully for Sean O'Keeffe and stylishly began to move clear in the straight. His rivals had no answers as he moved further clear by the last and he was far from extended in coasting in by 12 lengths at 15/8. Bleu D'enfer came in a remote second at 80/1 for trainer Stuart Crawford who has had a four-timer in Ayr at the time of writing. Silver King was a head away in third at 14/1. Demandrivingdouvan the even-money favourite, couldn't make an impression at the business end as he came in fourth.

Trainer Paul Nolan said: “Sean said he felt like a proper horse and said three out he just came alive.

“He said 'it's going to take a good one to beat me' and when he heard a horse coming behind him he just quickened up.

“Over a trip he can do that and he needs that trip. It doesn't happen very often, unless maybe at Limerick, but we actually think he'll handle real heavy ground every bit the same as that and that would put others out of their comfort zone.

“I was a little bit worried about the inside track first time around as you can see some of the horses aren't handling it.

“It's nice to get back with some of the good ones. We'll aim for the Albert Bartlett, we might as well aim high.

“Hopefully he'll come out of it grand and we'll work from there.

“We had very little during the summer and then a few little things went wrong. Hopefully we have a few nice ones to come, and he's one of them. He had got beat it was going to be a long struggle.”

Paddy Power put Sandor Clegane into the Albert Bartlett at 16/1 and into the Ballymore at 25/1.