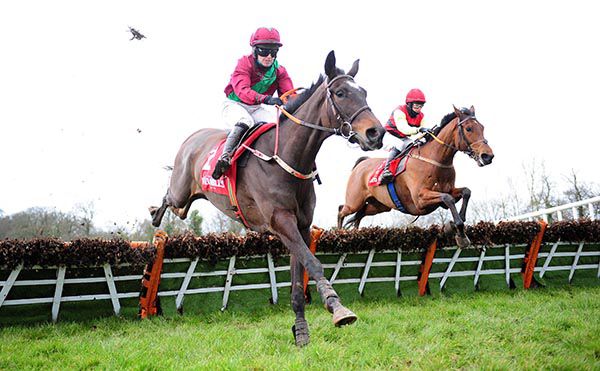 Johngus and Sheila Ahern wouldn’t go down without a fight though. That Arakan gelding wasn’t helped by a jumping error or two, and eventually lost out by a head. Gaulois ran satisfactorily to finish nine and a half back in third on debut. On the heavy surface only three horses finished.

"He did it all well himself and battled well to the line. I'm delighted for Mags to get a winner at her local track. It's tough work out there but he had the most experience in the race and that stood to him,” reported Lisa O’Neill.

"That's my first winner in this Ladies Series so it is nice to finally get one on the board."

The Irish Horseracing Regulatory Board Veterinary Officer examined Fangio De Vassy (FR), trained by Henry de Bromhead, at the request of the Stewards and reported the animal to be post race normal.

The Stewards interviewed Miss S. Ahern, rider of Johngus, concerning her use of the whip in the latter stages of this race. Evidence was heard from the rider concerned. Having viewed a recording of the race and considered the evidence the Stewards were of the opinion that Miss S. Ahern was in breach of R10(3)(g) by using her whip with excessive frequency. Having taken her previous record into consideration, the Stewards suspended Miss S. Ahern for 1 raceday.