A sweat for favourite backers but Codd has matters in hand 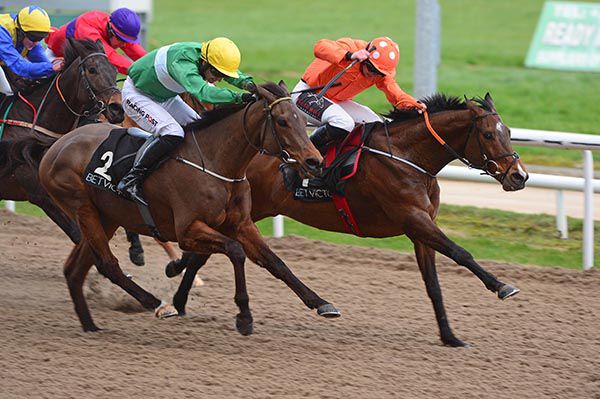 Winner Markhan s report card after the BetVictor (Q.R.) Handicap could be marked with a 'B' following the opener at Dundalk tonight.

The b in this case equates to the word brave, an attribute that applies to successful jockey Jamie Codd as well, not that we didn't know that already.

From off the pace Codd engineered a very tight passage between horses on the 6/4 favourite (from 2s) to deliver his challenge in the final furlong.

Once in the clear Markhan and Codd weren't going to be denied, going on to beat second market choice Dalileo by half a length.

“It tightened up for a stride or two but it actually suits that horse as he likes to be in the hustle and bustle of a race. Once he got out he started motoring so it worked out well," said Codd (enjoying his first Dundalk success) on the Gordon Elliott-trained victor.

“We went very steady but he’s run over seven furlongs at Laytown so he’s not short of a gear for that and it probably suited him.

“Busty (Amond) and Mouse (O’Ryan) own a leg in him and they’ll make a plan along with Gordon.”

The Stewards interviewed Mr J.J. Codd, rider of Markhan (USA), concerning his use of the whip in the closing stages of this race. Evidence was heard from the rider concerned. Having viewed a recording of the race and considered the evidence, the Stewards were of the opinion that Mr. J.J. Codd was in breach of Regulation 10.4 in that he failed to give his mount time to respond. Having taken his previous record into consideration, the Stewards suspended Mr. J.J. Codd for 3 racedays.