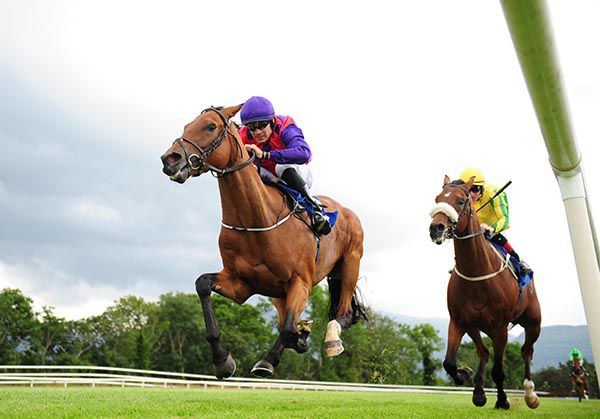 A good fifth on debut at Gowran, the John Murphy trained victor got off the mark on his next start at Down Royal.

Sent off at 4/1 this evening (from 5s), the son of Born To Sea was settled in second by Robbie Colgan, as the aforementioned market leader attempted to make all.

Pushed along by Colgan from the two furlong pole, the winner was ridden to the front with over a furlong left to go, keeping on well from there to win by two and three parts of a length.

Pythion had to settle for second under Colin Keane for Ger Lyons, while 100/1 chance Rare Pearl was another nine lengths away in third.

"We've always liked this fella - he is a big strapping horse and we gave him plenty time," said Murphy who trains Shared Ambition for the Paola Hewins & Olivia Hoare Partnership.

"He is related to a lot of good horses and I can't wait to run him in Stakes races. He has a big future and we always said we'd wait with him to fill up his frame.

"We'll probably go back in trip to a mile or 1m 2f in a Stakes race next. Robbie thought he was a bit green still but I was impressed he could quicken off that pace."

The Stewards received a report from the Clerk of the Scales, Mr. P.L. Malone, that A. Mackay, rider of Snow Leopard had presented himself to weigh out at 2lbs overweight where such overweight had not been declared under Rule 195 (i). Evidence was heard from the rider concerned who stated that he had shed some weight to ride at the correct weight but had rehydrated before weighing out. Evidence was also heard from John Joseph Murphy, trainer of Snow Leopard. Having considered the evidence, the Stewards allowed A. Mackay to ride Snow Leopard but fined him E150 for a breach of Rule 198 (vii)(a).

The Irish Horseracing Regulatory Board Veterinary Officer examined Pythion (FR), trained by G.M.Lyons, at the request of the Stewards and reported the animal to be post race normal.

The Stewards received a report from the Clerk of the Scales, Mr. P.L. Malone, that A. Mackay, rider of Snow Leopard, had weighed in at 1.5lbs overweight. Evidence was heard from the rider concerned who stated that he had rehydrated after he had weighed out at 2lbs overweight and this was the reason for his further increase in weight. He confirmed that he had not changed any equipment from the time of weighing out. Having considered the evidence, the Stewards were satisfied that A. Mackay was in breach of Rule 231 (i) by failing to draw the weight at which he had weighed out and therefore suspended him for 1 raceday.