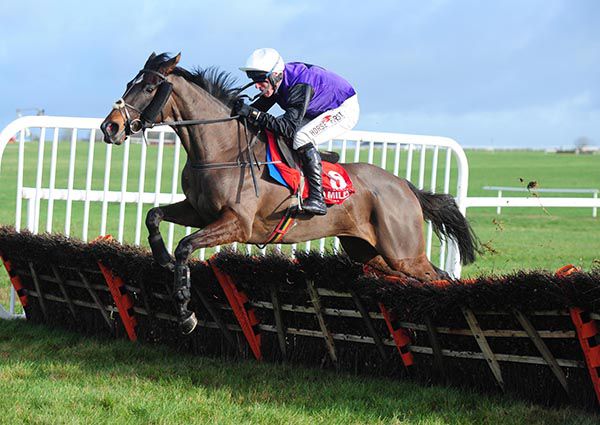 Irish European Breeders’ Fund and Connolly’s RED MILLS have announced that the €75,000 Auction Hurdle Series Final will take place on Gold Cup Day at the Punchestown Festival, Wednesday May 1st.

To enter the €75,000 final, horses must have run in one of the fourteen qualifiers and have not won a listed race or a Grade 1, 2 or 3 contest.

To date nine of the fourteen qualifying races have been run with the next race taking place on Thursday January 24th at Gowran Park on the prestigious Goffs Thyestes Day.

This is the first year of the series, which commenced at the Listowel Harvest Festival. The series was designed to create opportunities for horses bought for €45,000/€30,000 or less at store sales in Ireland and the UK, thereby, giving owners and trainers an opportunity to claim some of the €355,000 prize-money on offer.

The conditions for the qualifying races specify that all horses must be by an EBF registered stallion and bought as an unraced three or four-year-old at a recognised National Hunt Store sale for €45,000/ €30,000 or less, with weight allowances depending on purchase price.

In addition, the €5,000 Weatherbys/ITBA NH Fillies Bonus Scheme is in place for all races in the series.

Speaking about the announcement, John O’Connor, Irish EBF Chairman, said: “The Irish EBF board would like to thank Punchestown Racecourse and Horse Racing Ireland in facilitating the series final to take place during the festival. It is an exciting prospect for connections to have a qualified runner at the festival and it gives a chance to one of the 51 trainers, who already have a runner qualified, to take home the first prize on May 1. The Irish EBF and our co-sponsor Connolly’s RED MILLS are committed to continuing and enhancing the series into the future and in so doing helping to support the NH sector and encouraging the purchase of NH store horses at auction for €45,000 or less.”

Speaking after The Holy One’s win in the RED MILLS Irish EBF Series at Thurles on Sunday, Jessica Harrington said: “I think it’s a great series, it really encourages people to go to the store sales to buy in that price range, some of the races are for horses bought for less that €45,000 and others for less than €30,000 and you have a chance of not taking on the very expensive horses and a lot of very good horses only cost that much. The final is on the radar now for The Holy One, 2 and half miles will suit him, as I think he stays further than today’s 2 miles.”

Eric McNamara, trainer, commented: “This series is a huge benefit to owners and trainers, every trainer I’ve spoken to is 100% behind it and are grateful to the Irish EBF and RED MILLS for their support. To have the final during the Punchestown Festival is a wonderful boost to the series and will focus everyone on qualifying their horses in the last four series races. We fully believe the series will continue to get bigger and better each year.”

Conor O’Neill, CEO Punchestown Racecourse said: “Punchestown is delighted to host the inaugural RED MILLS Irish EBF Auction Hurdle Series Final as part of the 2019 Punchestown Festival on Wednesday May 1. We continuously strive to enhance our festival race programme in conjunction with Horse Racing Ireland and I believe this race is certainly an exciting addition to that. It’s a fantastic initiative by the Irish EBF which is generously supported by RED MILLS and provides a vital opportunity for both owners and trainers alike to compete at the festival. Boasting a valuable prize fund of €75,000, I think it will be very well supported by the industry and I would like to thank all those involved for bringing this concept to fruition and we look forward in anticipation to staging the final on Gold Cup Day. “

Gareth Connolly, Sales and Marketing Director at Connolly’s RED MILLS said; “We’re delighted to have the opportunity to stage the RED MILLS Irish EBF Hurdle Series Final at the Punchestown Festival. As well as the attractive prize-fund of €75,000 it’s another opportunity for trainers and owners to have a runner at the Festival. We’re very grateful to everyone who helped make this happen. The series is building momentum and with another four qualifiers to go after Thursday’s leg in Gowran, we expect the final will be hotly contested.”