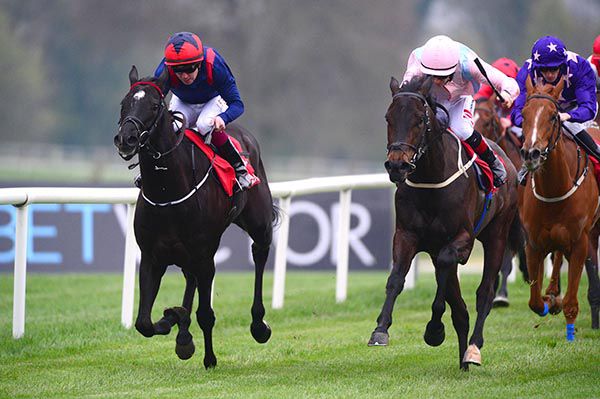 Basic Law stepped up on a promising debut second placing at Naas last month to take the Irish Stallion Farms EBF Median Auction Maiden at Gowran. Geneticist (20/1) ran very well on his debut for Michael O'Callaghan and Leigh Roche and looked like he might hold Basic Law inside the final furlong.

Under Colin Keane Basic Law really got the message late on though, and Ger Lyons' Lawman gelding got there near the line to win by a neck.

First-timer Snapraeceps (33/1) finished off strongly for third, half a length back. The Canford Cliffs filly represented Joseph O'Brien and was ridden by Shane Crosse.

“We're delighted with that. Seven furlongs on a tight enough track is as sharp as he wants it,” said Lyons' brother Shane.

“He will want a mile on a galloping track, if not a little bit further. Fair play to Gary (Carroll) the last day as he taught him an awful lot.

“He's still very green and there should be a lot more improvement to come. That would suggest that he's a nice horse.

“I said to Colin 'you had to help him' and he said 'yeah it was just absolute greenness.

“In Naas it was only the last two furlongs that he got to learn something. I'd say he's a nice horse and we're happy with that.”