Bay scores again at Dundalk on first run for Coyle 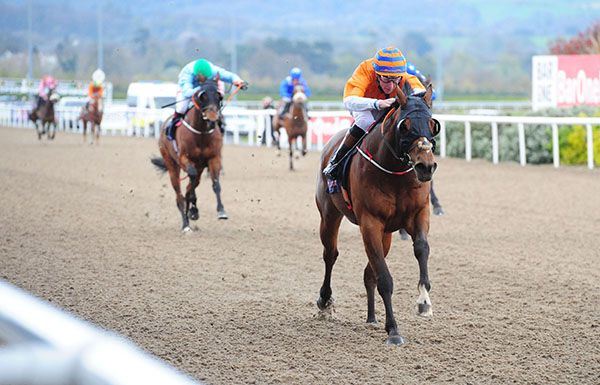 The new connections of Georgian Bay got instant dividends on their investment when the gelding scored on his first outing for Thomas Coyle in the claimer at Dundalk. Elysees Palace was a warm order in the mile-and-a-half contest, going to post a 1/2 shot having been 13/8 this morning.

The Mark Prescott-trained raider made the running but came under pressure turning for home and faded tamely.

Daire Davis, riding his second winner, produced Georgian Bay to lead two furlongs out and he stretched clear inside the final furlong to record a comprehensive seven-and-a-half length win.

The 11/2 winner had won three times for previous trainer Ado McGuinness at the venue over the winter before being claimed by owner Rory Slevin three weeks ago.

“We don't have him too long, three weeks, and hopefully we can keep hold of him now,” said Coyle.

“On that evidence he'd probably stay even further. That was the one doubt coming into it but he's put that to bed anyway.

“Daire as very good on him. We just told him to ride him cold and in fairness to the young lad he used his head, he seen Colin moving and he moved up with him.

“We'll probably go back handicapping if we do hold on to him, maybe this trip again or we could try him over a little bit further, which would open things up, as he does settle well.

“We were saying before if we did hold on to him we'll show him a hurdle and hopefully get another couple of wins out of him.”

The winner was subsequently claimed by Nigel Slevin. Unfortunately Elysees Palace was badly injured having been reported to be lame pulling up. He had been claimed by Mr GC Murphy to be trained by Michael Butler.