"Best performance yet" from Slattery's View The Bay 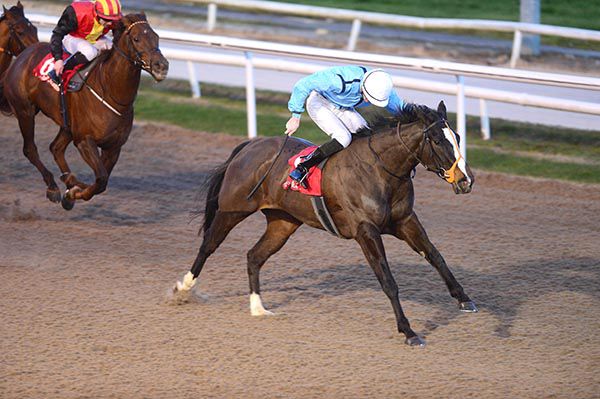 View The Bay (4/1) made the most of her opportunity under a light weight in the opening RacingTV #12.00 Offer Starts Tomorrow Handicap at Dundalk.

Two and a half length runner-up Danz Gift (4/1) did well to get as close as he did. He reared up leaving the stalls and had to come from the back of the field under Wayne Lordan.

It was a half length then to Plough Boy (10/1) in third whilst favourite Amanaat (7/2 into 9/4) got no luck in running in the straight and ended up in seventh place.

“We rode her a bit differently tonight as she was kind of pulling up in front. We held on to her a bit more and it seems to have worked,” said winning trainer Andy Slattery on the Ben Coen-ridden victor.

“She got left here the last night she ran over five furlongs but it was her second run back and I'd say she bounced after her break.

“She won a seven-furlong maiden after being off for six months and I'd say she just bounced then.

“Tonight was her best performance yet. I was kind of planning for the six-furlong €25,000 race here in two weeks time. That was the plan whatever happened tonight.”

D.W. O'Connor, rider of Amanaat trained by Denis Gerard Hogan, reported to the Clerk of Scales that his mount got caught in a pocket and was unable to get any run in the straight.

W.M. Lordan, rider of Danz Gift trained by Ms. Sheila Lavery, reported to the Clerk of Scales that his mount reared up and lost ground when the stalls opened.