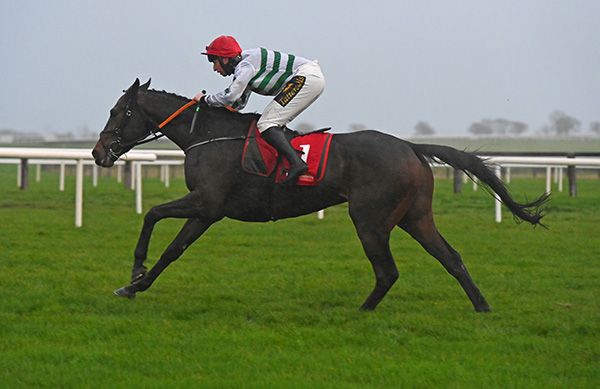 Successful on his sole point-to-point start when trained by Warren Ewing, the Milan gelding was subsequently purchased by current connections for 350,000 pounds.

Beaten into second by the smart Carnfunnock on his racecourse debut at Down Royal, he was sent off a 15/8 chance today.

Settled towards rear by Jamie Codd, the Bective Stud owned victor took closer order on the approach to the straight and swept to the front with a furlong and a half left to race.

He increased his advantage inside the final furlong and came home three-and-a-quarter lengths to the good.

Fellow point-to-point winner Chapeau Du Soleil, who was sent off the 4/6 favourite, proved a difficult ride for Patrick Mullins.

He dropped to fourth and looked a spent force early in the straight, but kept on again in the closing stages when brought to the near side running rail, eventually filling the runner-up berth

"He's a nice horse. We thought he would win the first day but he's a proper horse and is one to look forward to. He'll stay in bumpers this season," Elliott said.

Paddy Power go 10/1 (from 20s) about Better Days Ahead for the Champion Bumper at Cheltenham in March. The runner-up is also available at 10/1 (from 13/2) for the same race.

From the 15 races at Fairyhouse over the weekend, Elliott won seven, completing a four-timer this afternoon that came in at just over 1327-1.

Nico de Boinville is confident Epatante can make the most of what appears a gilt-edged opportunity in the Sky Bet Yorkshire Rose Mares’ Hurdle at Doncaster on Saturday.

Paisley Park back for more at Cheltenham

Paisley Park heads to Cheltenham seeking a fourth Dahlbury Stallions At Chapel Stud Cleeve Hurdle success with connections of the 11-year-old confident his spark has been reignited.

Ashroe Diamond bids to give Willie Mullins back-to-back victories in the Awardsandgifts.ie Solerina Mares Novice Hurdle at Fairyhouse on Saturday.

Willie Mullins on cusp of 4000 winners

Champion trainer Willie Mullins is on the cusp of yet another career milestone as a double at Gowran Park on Thursday leaves him just one shy of 4,000 world-wide winners.