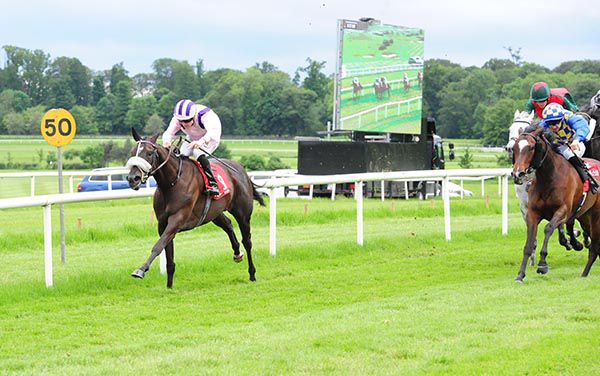 Black Magic Woman landed a gamble in the feature at Gowran this afternoon, the Ashgrove Stables Irish EBF Fillies Handicap.

Successful on her second start at Dundalk last August, the Jack Davison trained Camacho three-year-old ran a cracker to finish second on her seasonal debut at Naas in March.

She since failed to make an impact on her next three starts, and was available at 28/1 in early shows for this seven furlong contest.

Opening on-course at just 6/1, the money continued to stream in for Gary Halpin ridden victor, and she eventually went off at just 9/2 in the colours of the JWD Partnership.

Drawn on the rail in stall one, she was soon settled behind the leaders in third and was ridden to challenge from the furlong pole.

She soon got to the front and powered home in the closing stages to score by a length. Waitingfortheday (11/2 into 4/1 favouritism on-course) ran on well to take second under Donnacha O'Brien for his brother Joseph, while Angels (8/1) was a length and a quarter back in third.

"I saw that her price was a lot smaller at the off than it was yesterday evening. Someone fancied her, and expected her to outrun her price, but it wasn't my money. I was just happy to see her hit the line in front," said Davison.

"It's nice to have her back on track. She's always been promising and we just had to get her to put it all together today. With the help of Gary Halpin she did that.

"The trip and ground was ideal, she got a lovely run on the rail and picked up well when Gary asked her. It was a really good performance.

"On that evidence I'd say she'd get a mile, now that she's running her race the right way around. I'd expect her to improve again off that.

"We'll look at the premier handicaps that are coming up. I had earmarked one a couple of weeks ago but we took her to York instead and the ground was a bit quick for her over there.

"I'll get my head in the program book now and look forward to the season with her. She's a nice filly to have.

"She wants nice good ground like today. It allows her to travel in her comfort zone and finish off her race strongly. Ideally she wouldn't want firm in the description as she's a big strong powerful mare and it helps if she can grab a hold of the ground."

The Stewards requested a report from Jack W. Davison, trainer as to the apparent improvement in form of Black Magic Woman, placed first, as compared with its recent form. The trainer reported that this filly found the ground too quick at York last time but being back on easier going today allowed her to travel within her comfort zone throughout the race. Having considered the evidence the Stewards noted the explanation offered.