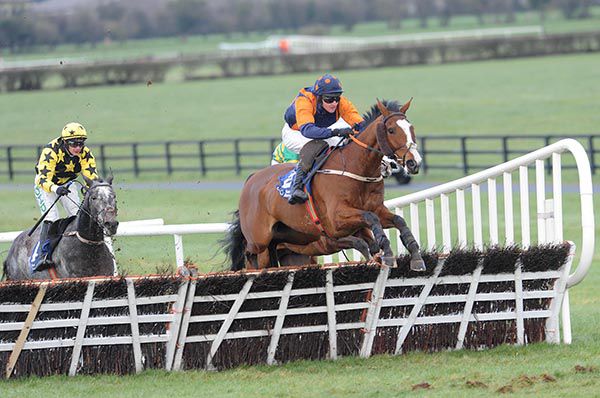 Five pounds claimer Browne narrowly missed out on winning the 2017 Galway Hurdle on Swamp Fox, passed close home by Barry Geraghty on Tigris River, and today gained his first black-type winner as he steered Gallant John Joe to a half length win over Mister Blue Sky

McKiernan later said “the race was on the short side and we were on the wrong side of the weights with a couple of them although we always thought he could do.

“We put him into the race because we couldn't see another one and we thought he'd need another run if he was to go to Fairyhouse or Punchestown. We're delighted because he works well at home and I'd say the cheek-pieces helped him a little bit.

“Barry (Browne) had a bit of bother with him the last day in Leopardstown, they got their wires crossed a little bit, but today everything went perfect. Barry gave him a powerful ride and he knows him well.

“He jumped beautifully, especially the last, and he did it very well. He should be a better horse over 2m4f or 2m6f.

“I'm not sure what the plan is and will have to talk to the syndicate. They were asking if he could go to Aintree but I'm not sure as he's a handful to get to the start relaxed. There was a lot of noise in the parade ring here today and I wasn't impressed. Luckily enough he had earplugs in or we would have been in trouble with him.

“One day in Leopardstown they took down a hurdle, and they were walking around for about five minutes. He was covered in froth before the race started but still finished second.”

Jonjo O'Neill is often referred to as the 'gallant Jonjo' following Dawn Run's famous win in the 1986 Gold Cup but today's winner is named after the song of the same name, which honours John Joe O'Reilly, from McKiernan's native Cavan, who won two All-Ireland's for the county in the 1940s.