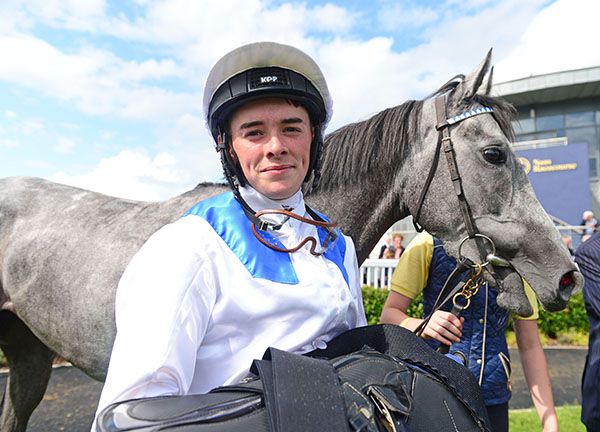 She’s My Dream proved just that for Sean Byrne as the Maddenstown apprentice recorded his first winner on the John Oxx-trained filly in division two of the Naas Racecourse Handicap.

Unlike in division one, those drawn high towards the stands’ side dominated in this 19-runner sprint.

The Zebedee filly was prominent throughout in this six-furlong event, and kept on well in the closing stages to beat Zathura by a comfortable length and a half. Rag Tatter and Lily Lily Rose were close up completing the places in third and fourth.

Oxx said, “I used to think she preferred running around a bend but there was nothing wrong with her there. She ran as straight as a die and it’s great that she has won two races.

“She’s very consistent. We were getting frustrated at Dundalk over the winter and we thought she was never going to win but she’s just that bit better on the turf.

“Sean was in RACE last year. He had only one year to go in school so he went back and did his leaving cert recently.

“He rides well and could ride anything. He has great hands, he’s tall but his weight is not too bad. He did a good job there with hands and heels, and I think he only gave her one flick. He didn’t panic and for only his third ride he did very well.”