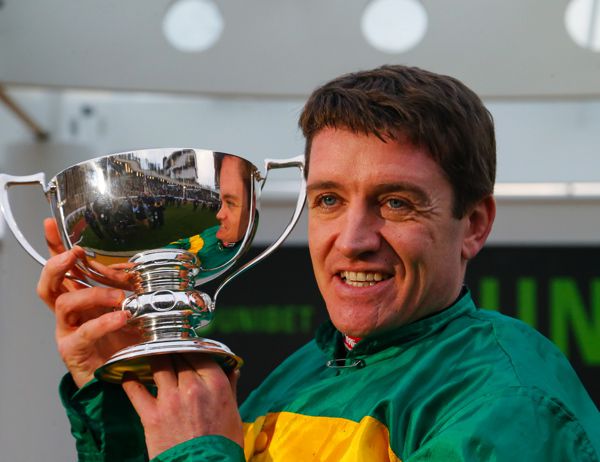 Champ lived up to his billing as he justified odds of even money to win a slowly-run Betway Challow Novices’ Hurdle at Newbury.

Nicky Henderson’s six-year-old, sent off a strong favourite in a field of seven for this Grade One on the back of a course-and-distance handicap win at the start of the month, had to defy a muddling pace in a tactical contest.

But there was no mistaking his superiority under Barry Geraghty as they took a narrow lead in the sprint to the last and then stayed on decisively two and a half lengths in front of Paul Nicholls’ Getaway Trump.

Kateson finished third, for Tom Lacey, a further three-quarters of a length back.

The winning trainer was relieved, and impressed.

“I was nervous today,” said Henderson.

“I was impressed with him. Whereas last time he took off with Aidan (Coleman) half way down the back, he was trying to take off with Barry off a slow pace.

“I love the turn of foot he had at the end of the day, given the fact he pulled pretty hard the whole way.”

Efforts to conserve energy were not helped by the stop-start gallop as Coolanly led for much of the contest after a scrappy start.

“We were at pains not to let him do what he did the other day and try to let it happen a bit later — and Barry did a great job,” added Henderson.

“(A good pace) is going to help him. It is funny because he is the most relaxed person you could have at home, you couldn’t find a more relaxed horse.

“You would have to say (he should stick to this two-and-a-half-mile trip) if he is getting it as well as he has the last two times. I can’t see him coming back (to shorter).”

As ever, Henderson has an abundance of emerging talent in his blue-chip stable, but he acknowledges Champ is among this season’s best.

“We’ve got all these good novices, and he is in that mix as well,” he said.

“It is a fantastic position to be in.

“We’ve got to juggle them around, but he has won a Grade One.”

It was also a fourth straight hurdles win for a gelding named by owner JP McManus after the nickname of 20-time champion jockey AP McCoy, who was retained to ride in his colours.

“He has got an amazing name — I’d say JP was sitting on this name for a few years, and it was a question of which horse got the name,” said Henderson.

“He has got a wonderful pedigree and is a lovely horse. He has got a name he has got to live up to, but we took a big step towards it today.

“He will have another run (before the Cheltenham Festival), but what and where, I don’t know.

“I would have thought we would have a look at Cheltenham (at the end of January), because we have got time to do that. He would get a penalty for that.”

Geraghty indicated, like the trainer, that Champ is unlikely to drop back down in trip.

“He has enough pace,” said the winning jockey.

“It was a slowly-run race, and we sprinted down the straight.

“He stays well — to have done what he did the last day in a handicap, to pull as hard as he did and still keep going.

“I suppose he has the options, doesn’t he?”

The messy gallop was no help to Champ, and Geraghty added: “It was (muddling), but I wouldn’t take anything away from the race.

“It was a smart race, and the form will work out. (But) he got it done, that’s the main thing. You have to be impressed with him. It was against adversity that he did it.”

Nicholls had reason to smile too after the performance of his runner-up, also inconvenienced by the slow tempo.

“He is improving rapidly,” he said.

“He was very keen the first mile, and we could have done with them going a bit quicker.

“We will have him in the Ballymore at Cheltenham, because I think there is more to come. We will probably go to Exeter in February — something like that would suit him well.

“I’m thrilled with the way he is progressing, and he looks a proper horse now. I would say we would have him in both the Ballymore at Cheltenham and then the two-and-a-half at Aintree.”