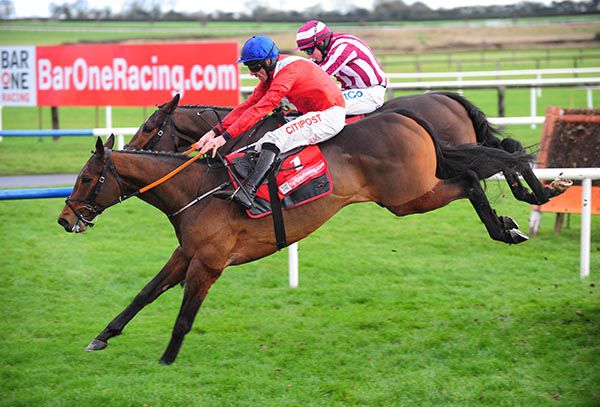 Connections of Cheveley Park Stud are hoping to see the famous silks sported at the Cheltenham Festival in March.

The easily identifiable red, white and blue colours have been carried to victory in some of the biggest races on the Flat by greats such as Medicean, Pivotal and Russian Rhythm.

Now the stud has branched out into the National Hunt arena, enjoying particular success in Ireland, specifically with their bumper horses.

Managing director Chris Richardson said: “They (David and Patricia Thompson) did some investing last year and I suppose it wasn’t as noticeable to start off with, as the horses ran in Mrs Thompson’s colours.

“They’ve since decided to run them in the colours of the stud and I suppose that’s what has captured the imagination.

“We have nine horses with Gordon Elliott, who has done very well for us so far. We also have six with Willie Mullins and one with Henry de Bromhead.

“We have a few jumpers in Britain as well. Redicean is with Alan King and won back on the Flat at Wolverhampton the other day, we have one with David Pipe and another one with Nicky Henderson.

“There’s also Highland Lodge with Jimmy Moffatt, who we’re hoping might go back to Aintree in the spring for the Topham Chase, and Seeyouatmidnight with Sandy Thomson, who ran in the National last season but has a had a few problems since, so we might not see him for a while.

“I think having the jumpers gives Mr and Mrs Thompson a bit of excitement through the winter and hopefully a reason to go to Cheltenham in March.”

Malone Road has really impressed in two bumper wins at Down Royal and Punchestown this season but after suffering a knee injury appears to be losing a race against time to make it to the Cotswolds.

“When you miss six or eight weeks this time of the year unfortunately that’s what happens.”