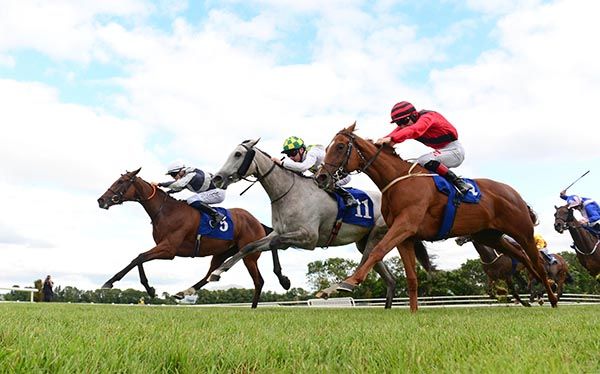 Cigamia showed both her quality and toughness to just get home in an exciting finish to the Irish Stallion Farms EBF Cairn Rouge Stakes, the mile Listed race highlight on day three of the July Festival meeting at Killarney.

The Flaxman Stables homebred daughter of Karakontie was well-supported from overnight quotes of 9/4 into 11/8 favourite at the off but needed a strong ride by Billy Lee to record her third career win.

A winner at the May meeting here this year, she was a creditable fourth last time in the Sandringham Handicap at Royal Ascot. Panama Red was prominent throughout under Colin Keane and disputed the lead with both Voice Of Angels and the favourite a furlong out.

All three kept on well but it was Cigamia who proved just the stronger beating Panama Red by a short-head with Voice Of Angels half-a-length back in third. Neptune Rock kept on well on the outer in the closing stages to take fourth.

Winning trainer Willie McCreery said, "It is beautiful ground but Billy said it was even a tad slow for her. She reared as the stalls opened at Ascot - it was 30 fillies, she is impatient and was in the stalls a while but I thought she ran a lovely race on quick ground.

"Billy said she idled a bit when she hit the front today but fought back. Everyone was fighting for their position and you won't get anything easy here. She was trapped wide but it is chopped up down the inner.

"It is onwards and upwards, she is a fast ground filly and will develop into a lovely filly for next year as she is only maturing.

"It is an important win for the pedigree and the Niarchos family (Flaxman Stables Ireland) stand Karakontie in America. It is an important Listed win for him and he had a Group 3 winner in America yesterday. It is lovely to train a winner for them and Billy is riding out of his skin."