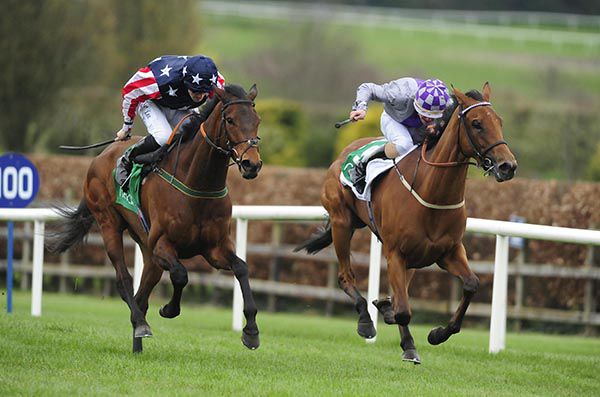 Trump Card recorded his fourth career success, and his second at Navan, as he ran down the long time leader Teologia in the navanadventurecentre.ie Handicap.

Successful in a similar contest at the venue last October, the Conor O'Dwyer trained gelding since ran in two maiden hurdles, before competing in three races on the all-weather at Dundalk.

Third on his most recent outing, the bay victor was sent off at 7/1 this afternoon, with Billy Lee in the saddle for the Trump Syndicate.

Settled in the chasing group behind the aforementioned Teologia, he was fourth as they entered the straight, but soon made steady progress.

He was ridden to challenge from over a furlong out and got to the front in the closing stages, going on to deny Teologia (9/1) and Luke McAteer by half a length. Stormy Tale (20/1) was another three and a quarter lengths back in third, while Mystique Heights (12/1) completed the placings in fourth.

The well-backed British Art was returned the 5/1 favourite (12s this morning and from 9s on-course), but he could only manage a disappointing tenth.

O’Dwyer said afterwards: "I wish I had another dozen like him! He's an unbelievably consistent horse, a great horse for a syndicate and always gives a good account of himself.

"We'll mix and match a bit of hurdling and Flat over the summer, and hopefully he'll pick up another one or two along the way. He's probably high enough now on the Flat and he’s going to get another bit, so we'll probably have to claim off him.

"He likes it here. Dundalk has got too quick and too tight for him. He loves a bit of room, and Billy gets an unbelievable tune out of him.

"He loves his racing and he takes it really well. He's a real genuine sort that you would like in your corner - nothing flash but he gets the job done."

G.P. Halpin, rider of Earl Of Bunnacurry trained by Gavin Cromwell, reported to the Clerk of Scales that his mount became upset in stalls.

D.P. McDonogh, rider of High Expectations (FR) trained by Gordon Elliott, reported to the Clerk of Scales that his mount was slow to jump.