Dare To Flare sparkles at Fairyhouse 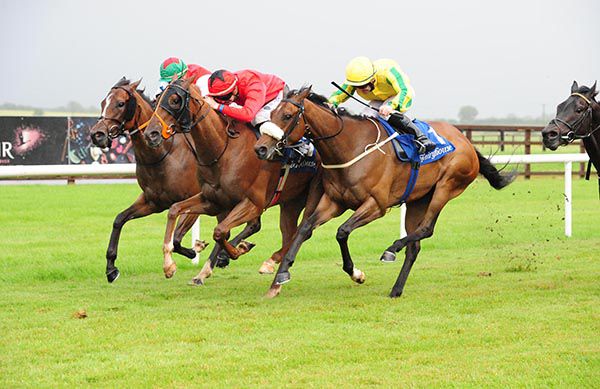 Dare To Flare and Ben Coen came from well off the pace to land the seven furlong Follow Fairyhouse On Social Media Handicap for trainer Andrew Slattery. The Dandy Man gelding showed the benefit of a recent outing at Limerick following a lay-off to stay on best and defeat Rita Levi and the front-running Red Bloodedcruiser by a neck and the same. The 9/4 favourite Trueba had every chance and was a further three quarters of a length away in fourth.

The winner took this three-year-olds only contest at odds of 14/1 to get off the mark on his eighth career start.

“He ran a lovely race in Limerick and we kind of fancied him coming here today,” said Slattery.

“He has a problem with the stalls, he missed the break again today but still won. He's probably a bit better than he's letting on.

“He'll go to Galway on the Monday night now for the three-year-old handicap. He should get in after winning that.

“That was always the plan. He'll come up the hill as he's tough.

“We just can't get him to break well enough. He probably should have won a maiden at Dundalk but he got left at the start several times during the winter and then we left him off.

“He had a lovely run in Limerick, when he needed the run, and we aimed for this race so it's worked out.”