Davids Charm making his own luck as he takes feature event 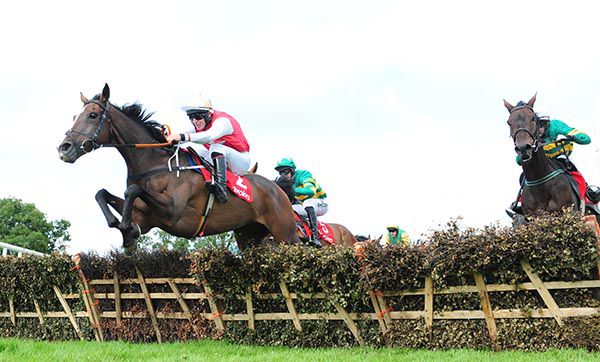 Davids Charm (6/1) hasn’t had the rub of the green several times over the last couple of seasons but after a landing a big pot on the level at Killarney, all once again went to plan as he scored in the Ladbrokes Ireland Listowel Handicap Hurdle for John Joe Walsh and Phillip Enright.

He was never far from the pace which was set by 2/1 favourite Ballyoisin (finished fifth), led after two out and kept on well to defeat the running-on Lakemilan (12/1) and Hearts Are Trumps (7/1) by three quarters of a length and one length.

It was a fourth win over hurdles for the eight-year-old gelding by Milan, to go with two on the Flat.

"Two years ago he was beaten a short-head in this race and was unlucky in the Galway Hurdle where he was caught at the start and got squeezed up passing the stands, said winning trainer John Joe Walsh.

"He was only beaten four lengths and he lost more than that in the race so I thought he would have won.

"Philip knew the horse from Galway and I told him to keep him out of trouble today and he gave him a brilliant ride; Philip is as cute as a fox!

"He has never jumped a fence and Tom O'Brien (owner) says to keep him away from the fences but I think he would jump a fence."