Dawn Of The West progressing and wins on 3rd start 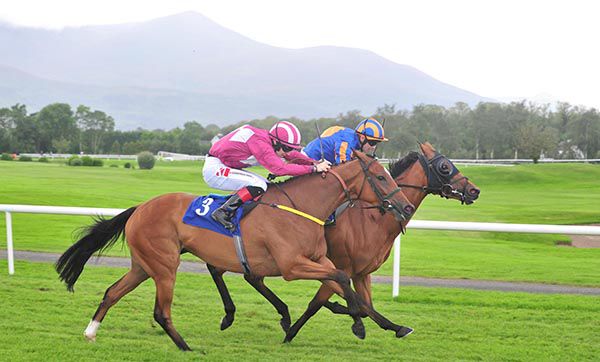 Dawn Of The West (Colin Keane, nearside) eventually got the upper hand on The Tooth Fairy (Wayne Lordan) at Killarney
© Photo Healy Racing

There was a difficult beginning for many punters as an 11/1 winner led home seven and twelve to one shots in the Irish EBF Supporting Irish Champions Weekend Fillies Maiden at Killarney. Dawn Of The West gained the day for Noel Meade and Colin Keane.

The Martin Cullinane-owned Dawn Of The West eventually got the better of The Tooth Fairy inside the last to triumph by a neck.

There was a gap of five lengths back to For Your Eyes in third.

"She stepped forward from Galway and stepped forward again there. We didn't go too mad which gave her a chance from a bad draw and we were out on the nicer ground, the fresh stuff," said Keane.

"She was good and game and had to dig deep so it was a nice performance."

At the request of the Stewards, C.D. Hayes, rider of Postcode Envy (GB), trained by J.F. Levins, reported to the Stewards' Secretaries that his mount did not move well on todays ground.