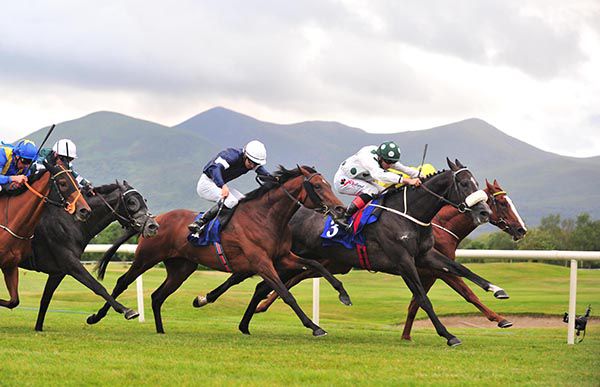 It wasn’t to be for Frankie Dettori at Killarney this evening, as his last chance of a winner came and went when Finding Nero 2/1 favourite, could manage only fourth in the Rentokil Initial 3yo Handicap. Johnny Murtagh’s gelding was one-paced inside the final quarter mile as Defining Battle followed up his game maiden win at Listowel with another tenacious effort.

Conor Hoban’s mount edged out Elite Trooper Grey by a head, with Millswyn two lengths further back in third. Michael Halford was completing a double on the evening, after Katiymann scored at Fairyhouse.

The winning rider remarked afterwards "he is a lovely big horse and will be a typical one of Michael Halford's that will improve. He toughed it out well and idled a little bit and when the second horse came to him he stuck his nose out.

"It was his first run in a handicap, he is a fine big tall horse who will do nothing but improve and you'd really like him."